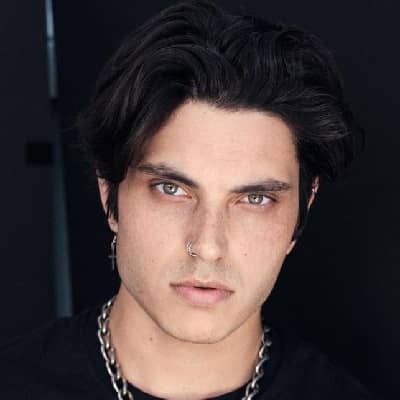 Samuel Larsen is very open about his love life. He is currently in a relationship with an actress Vanessa Dubasso. However, it is unclear that how and when they began dating each other but their relationship rumors started circulating in early 2018.

The couple often uploads each other pictures in their respective Instagram account. As of now, it seems their relationship is going pretty strong.

Before Vanessa, Samuel has been in a relationship with actress Scout Taylor-Compton for two years. The pair started dating in the year 2011 and also spotted together on various occasions including a number of red carpet events. However, they parted way in the year 2013.

Who is Samuel Larsen?

Samuel Larsen is an American renowned actor, model, and singer. He is best known for his prominent role in films like Glee (2009), Keana: Candy from Strangers (2013), and After (2019). Further, he was a member of the band Bridges I Burn but as of now he pursuing his solo singing career and has signed to the Roc Nation label.

Lately, he appeared in the novel-based film, After We Collided which is also the sequel to After (2019) where he portrayed the role of Zed Evans.

Samuel’s birth name is Samuel Peter Acosta Larsen. He was born in San Francisco, California, the U.S. on August 28, 1991. Samuel holds an American nationality and belongs to mixed ethnicity of Mexican, Danish, Spanish, and half of a percent Persian.

The name of his parents is Henrik Larsen and Lupe Acosta Larsen. His father is from Denmark whereas his mother is from Mexico. The actor has an older brother named Manolo Acosta and a younger sister named Morgan Larsen.

Samuel attended the Murrieta Valley High School from where he graduated in the year 2009. During his sophomore year, he performed in the school festivals as the vocalist and guitarist of the school band 15 North.

In 2010, Samuel auditioned for season 9 of American Idol but his journey ends up during Hollywood week. Afterward, he started his modeling career and did some runway modeling for fashion designers including Ashton Michael.

During a runway show, Samuel met Skip Arnold and the duo formed the band named “Bridges I Burn” soon after they joined third member Salvatore Spinelli. However, the band later split up and Samuel started his solo singing career. He released his debut EP ‘Vices’ on October 27, 2014. During 2017 and 2018, he had also toured and performed with the Canadian rock band ‘Palaye Royale’.

He has also participated in a reality television series, The Glee Project where he was the winner of season 1. In season two, he appeared as a guest judge in the 2nd episode “Dance-ability” of the show. He had also auditioned for the role of Sam Evans but he was not selected for the role which went to Chord Overstreet.

However, Samuel later made an appearance on the thirteenth episode of the third season, titled “Heart” as Joe Hart. In 2015, he made his big-screen debut through the movie, The Breakup Girl where he portrayed the role of Uri. That year, he also appeared in the guest role in the 6th season of Hawaii Five-0.

To date, Samuel has managed to maintain a clean profile in the public. He hasn’t been part of any sorts of rumors and disputes that create headlines in the media.

As per other online sources, he has an estimated net worth of $3 million throughout his profession as an actor and singer. Moreover, his salary, yearly income, and other assets are still under review.

The actor has an impressive height of 6 feet tall. His weight is around 70 kg. Further, he prefers to keep long hair and his hair color is black. He has green pair of eyes.

The actor has a verified Instagram and Facebook accounts where he has over 306k followers and 147k followers respectively. He is active on Twitter with more than 240.8k followers.

You may also read Charlie Gillespie, Bailey May, Link Neal.