Samuel Page is a famous American actor. He is married to Cassidy Boesch and the couple has three children together.

Eventually, they were blessed with a son named Logan in 2016. Then in Aug 2011, this couple welcomed their twin daughters.

Previously, Samuel was in a relationship with Sarah Carter. They dated in the year of 2004 and ended the year later. 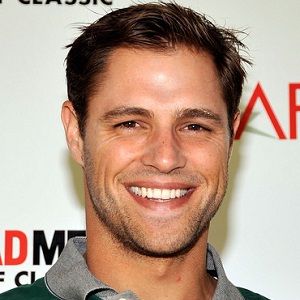 Who is Samuel Page?

He was born on November 5, 1976, in Whitefish Bay, Wisconsin, USA. His ethnicity is Caucasian.

There is nothing to write about his father and mother’s identity and siblings too.

Discussing his education and qualifications, he attended the prestigious Princeton University. He graduated with a degree in ecology and evolutionary biology.

Moreover, he submitted his senior thesis on the mating behaviors of the mosquitofish. Eventually, it was published in a science journal. He found his interest and enthusiasm in acting while studying at the University.

Samuel Page started his career by appearing on TV shows such as Popular, 7th Heaven, Undressed, and Men, Women & Dogs. After that, he landed the role of  Trey Kenyon on the daytime soap opera called All My Children in 2002.

Moreover, he was seen as a guest in series like American Dreams, CSI: Miami, and Wicked Science. He starred in a drama series called Shark (2006). Similarly, he appeared in TV shows like ABC’s Desperate Housewives and The CW’s Gossip Girl as Colin Forrester.

Additionally, he appeared in a video named “Yes We Can” in support of Barack Obama’s presidential bid in 2008. Also, focusing on his big-screen appearance, he appeared in films such as The Brotherhood, Prison of the Dead, and Micro Mini-Kids.

In 2011, he showed up on the cover of J.Crew’s clothing catalog and magazine in February. Afterward, he landed a role on the hit Netflix drama named House of Cards for their second season.

Page’s work is always respected and appreciated. He has rarely attracted any rumors and controversy which could hamper his image.

Also, he doesn’t believe in the fame earned from controversies and rumors. Currently, there are no noteworthy rumors and controversy to write about.

Samuel Page has a height is 6 feet (1.83m) and their weight is 85 kg. He has dark brown eyes and has light brown hair color.

Samuel is active on social networking and she has around 8.4k and 666.6k followers on Twitter and Instagram respectively.