Sandra Vergara is a Columbian actress, model, and host well known for her roles in  Fright Night (2011), God Bless America (2011), and Eleventh Hour (2008). She is possibly single. 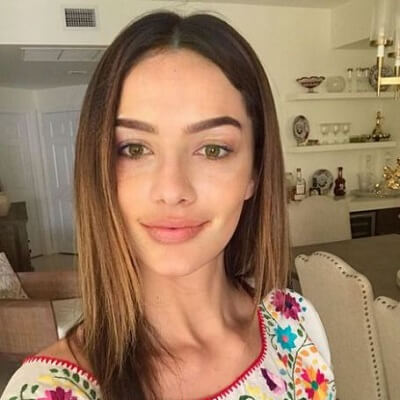 “It helps, not because Sofia helped me. It’s not like that. I did everything on my own, but it helps because it’s name recognition. She is beloved by the public, and so being related to someone who is so dear is a good thing. It wouldn’t be the case if my sister was Lindsay Lohan.” “There’s really not much anyone can do to help another person. For me, leveraging is a myth. She did it on her own. I’ll do it on my own. That’s how it is. As much as Sofia can say to someone, they have to be impressed by you. There’s too much competition, too many girls that are much prettier than I am. There are times when one could land a role by pure luck. And sometimes it’s the color of your hair or your height doesn’t work, and neither do you.”

Vergara is very focused on her job and career.

She loves her pet cat, Stewie.

During weekends, she loves going out for lunch and dinner with her cousins.

Who is Sandra Vergara?

Currently, she works as a host for a TV show, People which talks about celebrity news and inspiring stories.

Her mother was the sister of Sofia Vergara’s mother, Margarita. She was a month old when her aunt adopted her.

Therefore, she is the cousin and adopted sister of actress Sofia Vergara, Veronica Vergara (sisters), and Rafael Vergara, Julio Vergara (brothers). She has many cousins and siblings and is close to them.

In 1998, her older brother Rafael was murdered during an attempt to kidnap him. Not wanting to be caught in the unrest that resulted in the murder, Vergara emigrated to the United States, settling in Miami, Florida along with her sister Sofia.

Vergara in films and TV series

Vergara started acting in 2004 with a role in the movie Days of Santiago. She appeared on her first TV show in 2006.

She appeared in a 2009 episode of CSI: Miami entitled ”Head Case”.

In 2010, Vergara appeared in the soap opera Chico de mi Barrio as Sofia and appeared in 40 episodes of the show. She appeared in the film Fright Night (2011) as Ginger and Mercedes Paar in God Bless America (2011).

In March 2011, Vergara portrayed the role of Tia in the pilot of NBC’s Man’s World.

In 2013, Vergara had a short-lasting role on The Bold and the Beautiful where she appeared as Theresa Corazon for four episodes. Later in the year, she guest-starred in an episode of CSI: Crime Scene Investigation.

In addition, she has also appeared in Tv series, Eleventh Hour, Nip/Tuck, Baila Reggaeton, and Fetching.

Further, At the age of 24, she also stepped into the modeling field. She also used to co-own the fashion company “Violetta Rose”.

She had begun being the co-host of a talk show revolving around plastic surgery titled Good Work, alongside drag queen Ru Paul and Botched’s Terry Dubrow, in 2015.

As of 2020, she is working as a host in the TV show, People. Recently she virtually interviewed musician Ricky Martin and Jaycen Joshua and actress Jane Lynch.

How Much Does Sandra Vergara Earn?

The 32 years old actress’s net worth is around $2 million UDS. She earns around $40K- $50K USD from her modeling assignments. Annually, she earns $110,982 USD from her hosting career.

She has 81.4K followers and charges around 1K per post. She is active on social media and has around 905 posts.

The movie she starred in, Fright Night‘s box office collection was 24.9 million UDS. As of 2020, Vergara’s sister Sofia has a net worth of around $180 million USD.

The Columbian actress has brown eyes and brown hair. She is 5 feet and 3 inches tall and weighs around 48 kg. She has a beautiful curvy body. Her body measurement is 29-23-31.

She works out five to six times a week for a fit body.

You may also know about the net worth, body measurement, and early life of Isabella Gomez, Makenzie Vega, and Cierra Ramirez.