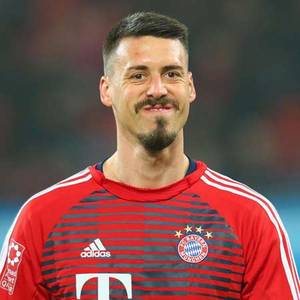 Sandro Wagner is a married man. He is a one-woman guy. Currently, he lives with his wife and children in Munich, Germany. Sandro lives a very secretive life apart from his football career. All the stats about his professional career are known to the public but details about his personal life are still behind the curtains. Although we know for sure that he is married, his wife’s name is not known. According to sources, they have been married for a long time now. Together, they have three children. They are Luca-Marie Wagner, Hugo Wagner, and Bruno Wagner. He only posts about his professional life on his social accounts. Therefore, it is hard to get the information about his private life in detail.

Who is Sandro Wagner?

Germany-born Sandro Wagner is a professional football player. Presently, he plays for the German football club, Bayern Munich. Also, he joined German national team in 2017. His playing position is as a striker. He is a German national.

Sandro Wagner was born in Munich in Germany. He was born on November 29, 1987. Since his early childhood, he played football. Moreover, he enrolled in a youth academy of Hertha Munich and Bayern Munich during his early childhood. Due to his secretive lifestyle, there is no information regarding his parents and siblings. Similarly, details about his ethnicity.

Regarding his education, he attended IST University of Applied Sciences.

Sandro Wagner started his career since his early days. From the beginning, the sport of football intrigued him. Professionally, he started playing football in 2006 at the Bayern Munich II. Previously, he played for youth teams of Hertha Munich and Bayern Munich between 1990 and 2006. In 2007, he got promoted to Bayern Munich’s first team. But he played for them for a short period of one year. Afterward, he played for MSV Duisburg from 2008 to 2010 and scored altogether of 12 goals for them. Then, he had to suffer ups and downs in his career. Sandra played for several other football teams for short times. Between 2010 and 2016, he also played for Werder Bremen, Hertha BSC and Darmstadt 98.

Currently, Sandro is under the multi-million deal with the Bayern Munich. Sandro earns a pretty good amount of salary. Consequently, he had made a huge net worth out of his football career. But as of now, these details are not known.

Sandro Wagner is not part of any major controversies. But he has been part of several rumors regarding his transfer. And it is a normal thing in the football market. Furthermore, being part of criticism for a bad game is normal to him and other footballers.

Sandro Wagner likes to maintain his body. He has an athletic body type. Sandro stands tall at a height of 6 feet 3 inches. Similarly, he weighs around 89 kg. While he has light brown hair, his eyes are of dark brown color. Being a footballer, he likes to train and exercise to keep his body in shape and good health.