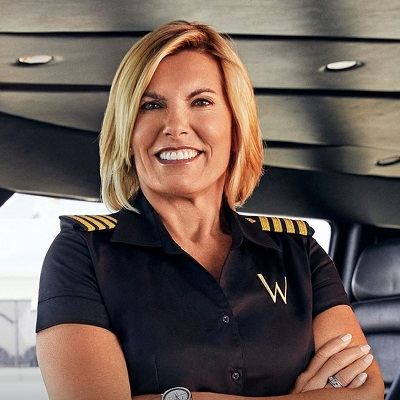 What is the relationship of Sandy Yawn?

Sandy Yawn is in a committed relationship with Leah Shafer. Her girlfriend, Leah is a gospel signer for Denver.

The dating history is a mystery for the public eyes. However, the couple does not hesitate to display their love and affection to each other. They first met in Los Angeles which was uncertain. In the very first slight, they felt in love with each other.

Her girlfriend, Leah was previously married for around 20 years. From that marriage, she has a 13-year-old daughter.

Who is Sandy Yawn?

Sandy Yawn is a Captain and reality TV star. She is renowned for the Bravo’s reality TV series, Below Deck Mediterranean.

Besides that, she is also an international motivational speaker too.

Sandy Yawn was born on the 23rd of February 1965 in the United States. She is of Germanic ethnicity.

Till the date, she has not shared any details about her father, mother, and siblings.

After training, Sandy Yawn joined White Star as a captain. For the company, she worked for 10 years. Moving forward, in February 2004, she became yacht captain of the luxury hatch, Tuscan Sun.

Later, in April 2008, she became the yacht captain of Yacht Pure Bliss. She worked as the captain of the hatch for three and a half years.

Moving forward, in 2017, she expanded her career as a Bravo’s reality TV series, Below Deck Mediterranean. In the series, she works with the Chief Steward, Hannah Ferrier.

Besides that, she appeared in other TV series including Below Deck Sailing Yacht, Kiki Mobile, and Watch What Happens: Live. Currently, she is exploring her career in motion pictures and as a motivational speaker too.

Besides that, she also makes through her TV appearances too. Through her appearance in the series, Below Deck Mediterranean, she earns in the range of $120k to $180k.

Apart from that, as a motivational speaker, her earnings are $39k to $637k.

Recently, she faced a backlash when she shared that she and her girlfriend, Leah Shafer forgot to use the directionals lined on many shop floors when they went shopping. Also, they were not wearing masks. Also, she joked about using dog filters on Instagram for the protection from the virus.

Later, she posted an apology video with the caption I Learned a Lesson on her Instagram account.

Sandy Yawn is a brown-eyed blonde. Her height is 5 feet 8 inches and weighs around 65 kg.