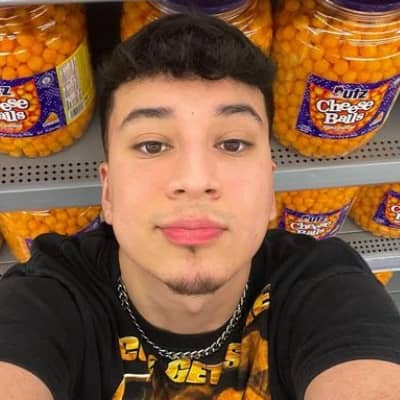 Santea is presently unattached and not in a romantic relationship. He hasn’t posted anything about his personal problem on the internet. There is also no information available about his previous relationships with his women. He is currently concentrating on establishing a solid career for himself.

Santea is a well-known emerging famous tiktoker, YouTuber, and social media personality with thousands of networking site followers. He is also well-known and well-liked on TikTok for his lip-syncing, dancing, and comedic routines.

Many of his admirers enjoy and adore his films on Tiktok and YouTube. He is the charming younger brother who has 407k subscribers on youtube and 2.9M followers on Tiktok. Hide & Seek(Influencer Edition) Santea Pov was his most recent YouTube video. In TikTok, he built the videos with his buddies and recently posted them.

Santiago Albarran was born on November 3, 2001, in Texas, United States. Santea is another stage name for him. He is of American nationality and follows the caucasian ethic. His astrological sign is Scorpio, and he is a Christian because he grew up in a Christian home.

Despite gaining recognition and notoriety through his tiktok videos, he has not revealed his parents’ names or occupations. There is also no information on whether or not he has siblings. He has not revealed any specifics about his youth, although he has always been interested in performing and comedy.

Santea rose to notoriety on the popular social media site TikTok by sharing lip-syncs, dances, challenges, and short-scene films. He began releasing videos in October 2019 and has received a lot of views and likes since then. His videos on his @santea_ account have received over 2.9 million admirers and 301.5 million likes.

He has worked with other social media stars, such as TikTok stars Emily Hernandez, Malu Trevejo, Amanda  Diaz, and Devin Coherly, to create videos for his followers. His video with the former was a lip-sync video set to the Belgian-Australian singer-songwriter Gotye’s song Somebody That I Used To Know. It has received almost 5 million views.

He is also well-known on Instagram and YouTube. He has almost 506K Instagram followers. His everyday life images, films, and photos with friends and family can all be seen here. Similarly, he is well-known on YouTube. In July 2022, he launched his own self-titled YouTube channel.

Deep Talk W Itsoraido and Santea: Dating/Sex Life is his most-viewed YouTube video, with over 1 million views. On his YouTube account, he posts videos about challenges, vlogs, and collaborations with celebrities.

He is also a part of the TikTok dancing group Dadwiggies, which comprises JaycoSet and ActuallyJose. He also has a clothing business called Sunnymerch. Not only that, but he is also attempting to pursue a modeling career and has done a few modeling gigs.

According to the source, Santea rose to prominence through his TikTok account. He is also well-known and popular on YouTube, but he has yet to disclose the distinctions and awards he has received in the medical field. His videos are well-liked by his admirers, but he has yet to win any awards.

Santea, for example, is a frequent user of social networking platforms. He may also be found on Instagram, where he goes by the name @santea_. On Instagram, he has 506k followers and 162 posts. He has uploaded several images of his buddies as well as photos of himself. He has also published images of himself traveling to various locations and attending and launching his shows. His most recent snapshot was of him entering inside to watch the game.

Similarly, He joined Twitter in November 2020 and has 74.8k followers. He has sent 306 tweets on Twitter. Santea also provided a link to the YouTube channel on Twitter. He also has 2.9 million followers and 301.3 million likes on TikTok under the username @santea_. He also has his own YouTube channel, @Santea, with 469k subscribers. However, Santea is not present on Facebook.

Santea is 5 feet 10 inches tall and weighs 71 kg. He is also a fitness fanatic who enjoys maintaining his physique in good shape via regular training. Despite the fact that he appears to be in good form, he has not published his physical measurements such as his hips, chest, and waist sizes. In terms of appearance, he has a white complexion, black hair, and brown eyes.

Despite his expanding popularity, Santea has managed to balance his business and personal lives admirably. He has never combined his two lives, making it confusing. He has always avoided rumors that have harmed his career. There are no bad rumors or scandals about him on the internet.

Santea’s net worth is predicted to be $1 million in 2022, according to the source. The majority of his income comes from his work as a Tiktoker. Aside from that, he makes extra money through his YouTube channel and endorsements. He also makes extra money by collaborating with other brands. Despite the fact that his net worth has been revealed, he has not disclosed the assets he has won, such as properties and a car collection.