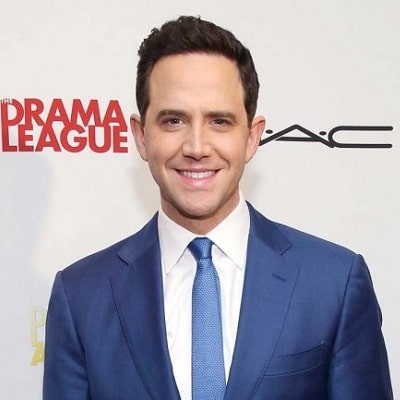 I want to continually play characters that speak to me, but also are different than what I've just done.

Acting is my first focus, but at the core, I'm a storyteller, and however that comes out is fine with me.

I only have control over what I do.

Santino Fontana is a married person. He has been married to actress Jessica Hershberg since September 5, 2015. They met for the first time at the Birdland jazz club, where both were performing. They began dating in 2011 and engaged in September 2014. The couple has not welcomed any children to date.

Recently, on June 9, 2019, the pair revealed that they are expecting a daughter. The pair are living together and happily without any sign of divorce.

Who is Santino Fontana?

Santino Fontana is a famous American actor and singer who is best known for appearing on the television show ‘Crazy Ex-Girlfriend’ as Greg Serrano. Moreover, he is recognized for originating the role of Prince Topher in the 2013 revival of Cinderella on Broadway, voicing Prince Hans in the 2013 Disney animated film ‘Frozen’.

Santino was born on March 21, 1982, in Stockton, Calfornia, USA. He was born to parents Sharon Marie Fontana and Ernest John Fontana. His father is an agronomist and his mother is an elementary school teacher. He has a sister but her name has not been revealed.

He is active in his professions since 2007. Moreover, he is also engaged with the social charity and he is working and providing necessary funding for the better treatments of the ones who are in need. Likewise, Santino has also been a part of various national level conferences within these issues.

Santino holds American citizenship but his ethnicity is a mix of Italian, Spanish, and Portugee.

Later, Fontana joined the University of Minnesota/Guthrie Theater BFA Actor Training Program and graduated with a class of 2004.

He co-wrote the musical comedy ‘Perfect Harmony’ in 2005. He made his appearance as Hamlet in The Guthrie theatre’s performance of the Shakespearean classic in 2006 and moved to New York City in order to cast as Mar in the Off-Broadway revival of ‘The Fantasticks’.

Santino made his official debut in Sunday in the Park with George and which was the work appreciable among his people that came across in the year 2007.

Recently, he appeared in movies which include ‘Off the Menu’, ‘The Vanishing Princess’, ‘Papercop’, and appeared in television series ‘Fosse/Verdon’ as James Henaghan in 2019.

It seems Santino has not been awarded and nominated for his work till date.

The talented actor has accumulated a decent sum of money from his career. According to online sources, he has an estimated net worth of around $30 million. However, his salary and income are still under review.

There was a rumor that he was leaving the show “Crazy Ex-Girlfriend” Season 2. The rumor ended after he left the show.

Santino Fontana stands a height of 5 ft. 10 inches with a bodyweight of 81 kg. He has dark brown eyes and black hair. But, his weight, shoe size, dress size, etc. are unknown.