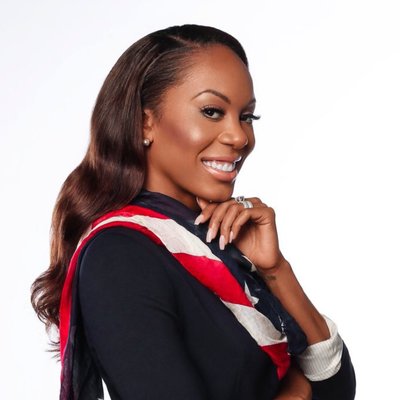 Failure I can live with. Not trying is what I can't handle!

No matter what you're trying to do there will be noise in the market... Before the race starts, I'm already focused on the victory

A lot of times in sport if you try to tell the truth it seems like an excuse.

The gold medalist former Track star is currently married to Aaron Ross who was a university sweetheart of hers back in Austin. Aaron is a former American football cornerback.

An episode of Platinum weddings featured the athlete star’s beautiful wedding. Richards and Ross had their first child on August 12, 2017, who the pair named Aaron Jermaine Ross II.

Who is Sanya Richards-Ross?

Sanya Richards-Ross, a Jamaican American former track, and field athlete was the best 400m runner in the world for a decade and competed internationally for the United States.

The young Jamaican-American athlete won Olympic gold in the 4×400 m relays at the 2004, 2008 and 20012 summer Olympics and is also a seven-time medalist at the World Championship in Athletes.

The female gold medalist was born on February 28, 1985, in Kingston, Jamaica.  Her current age is 34. Her parents are Sharon Richards and Archie Richard.

To pursue her dream as an athlete, Sanya Richards-Ross had to move to the United States in her early adolescents.  As Sanya was only aged 12, her family moved with her to America and lived in Fort Lauderdale to support their daughter’s aspiration as an athlete.

Sanya was a 2002 graduate of St Thomas Aquinas High school In fort Lauderdale, where she was titled the National High School Female Athlete of the year with a 4.0  GPA.

She attended the Immaculate Conception High School before leaving her hometown Jamaica for the U.S.

After moving to Amerca, she attended the University of Texas at Austin.

While Richards was a freshman at the University of Texas in 2003, she won the NCAA national championship in the 400 m with a time of 50.58.

At the Athens Olympics in 2004, she was part of the US team and finished first int he 4×400 m relays. In 2007, she, unfortunately, failed to qualify for the 400m race at World Championship in Athletes, due to an illness, caused her to finish in the fourth position.

Richards took home a national title in the 400m relay finishing with 50.05 seconds at World Championship in 2009 which as stated by her was her number one goal.

In 2010 season, Sanya ended up with an injury that ended her season but she bounced back in 2011 to conquer her fifth gold medal from the World Championship.

Richards was still recovering from her foot surgery, when her track season in May 2014 in Jamaica started. She won the Diamond League races in Paris and Brussels with the best of 49.66.

Regrettably, her injury to her right hamstring in Olympics trials on July 1, 2016, brought out an end to her career as an athlete.

Shortly after her announcement of retirement, she was a commentator for the track and field events at the Olympics.

When she was at the University of Texas, she won several NCAA tournaments in 2003.

She won herself a gold medal in the women’s 400 meters in the Summer Olympics 2012.  After a career-defining world championship, she won her final two golden league races with new world-leading time.

Throughout her professional career as an athlete, Richards has accumulated a net worth of around $2.5 million. However, there is no information about her annual salary.

The former track star admitted that she had an abortion before she flew to Beijing in 2008 for the Olympics. She stated that the decision broke her spirit and took years before she forgave herself.

The athlete star’s height is about 5ft 8 in and weighs about 62kg. The Jamaican Beauty, Sanya has dark brown hair and black eyes.

Also know more about the early life, career, net worth, relationships, and controversies of other models, singer, and actress including Cody Riffle,  Missy Franklin, Katie Ledecky.