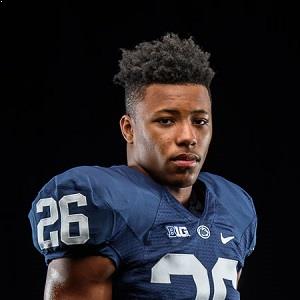 I want to break every single running back record’ in Nittany Lions books.

Perfection is impossible, but you don't stop aiming for it.

Sometimes you just got to settle back and relax and be like, 'All right, Saquon, chill. You know what you're doing. Just do the little stuff.' The little stuff will get you there.

What is the relationship of Saquon Barkley?

Saquon Barkley is currently in a relationship with Anna Congdon. She is a Penn State sophomore. No further information relating to the relationship has been revealed as of yet.

Furthermore, there is no detailed information regarding any relationship that Barkley might have been involved in prior to his current relationship.

Who is Saquon Barkley?

Saquon Barkley is an American football running back who plays for the Penn State Nittany Lions.

Furthermore, he originally committed to Rutgers before changing to Penn State.

Barkley was born in The Bronx, New York City, New York on February 7, 1997, to Alibay Barkley and Tonya Johnson. He became intrigued by the world of football in his early life.

In addition, he is of American nationality. Additionally, he belongs to the ethnic background of African-American.

There, he rushed for 3,646 yards with 63 touchdowns from sophomore to senior year, which includes 1856 yards and 31 touchdowns as a senior.

Later, he joined Penn State University where he played college football and was rated as a four-star player during his recruitment.

Barkley is quite active on social media.

Initially, in his career, Barkley joined Penn State University in 2015. In his first year, he rushed for 115 yards with touchdowns in his second game. Next, in the month of October, he missed two games due to a severe injury. Also, during his freshman campaign, he had 182 carries for 1,076 yards and seven touchdowns.

For his first game of the sophomore campaign, he rushed for 105 yards and 33-13 wins over Kent State. Next, in week five against Minnesota, he ended the match with an outstanding 25-yard touchdown run.

He had his first-ever 200-yard rushing game in college in the sixth week, against Maryland. Furthermore, he accomplished 31 carries for 202 yards and one touchdown.

In addition, people named him the Big Ten Offensive Player of the Year due to his remarkable performance. Later, he carried 19 times for 83 yards and rushed for one touchdown on December 3, 2016.

Barkley became featured in Mel Kiper Jr’s headline. All in all, he is considered to be one of the best players on the field with his smooth and versatile playing style.

Some of the awards and honors that he has received are Big Ten Champion, AP Third Team All-American, Sporting News All-American second team, Big Ten Offensive Player of the Year, Big Ten Running Back of the Year, All-Big Ten First team, and others.

How much does Saquon Barkley earn?

Currently, there is no information regarding his salary and he has an estimated net worth of $32 million as of 2022.

There was a rumor that Barkley might be considering skipping a bowl game to preserve his health which had become a controversial trend during the 2016 bowl season. Currently, there are no controversies concerning Saquon Barkley.

How tall is Saquon Barkley?

Talking about his body measurement, Barkley has a height of 5 feet 10 inches (1.80m). Additionally, he weighs 104 kg. Furthermore, his hair color and eye color are black. There is no information about his shoe size and dress size.

Know about the top candidate of Heisman Trophy of the year, Saquon Barkley. All about his success till this date!