Sara Gilbert is an award-winning actress who featured in ABC sitcom. She started as a child actor and was listed on VH1's list for 100 Greatest Kid Stars. Sara is openly gay is married to her love. 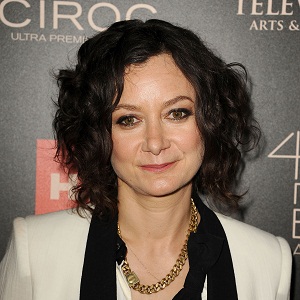 Yeah, I started when I was 6 years old. My brother and sister would get all of these presents at Christmas time from the cast and crew of their show and I was jealous. So I decided that I had to become an actor

Safe drinking water isn't just something to worry about on your tropical vacation. U.S. tap water is ridden with arsenic, lead, and pharmaceutical drugs. In short: Get a filter

I'd like to do more stuff with less sarcasm.

Levi Hank was the son of Allison and Sawyer Jane was the daughter of Sara. Sara didn’t disclose about her personal life and her sexuality, but later in 2010 with the launch of her show ‘The Talk’ she announced that she was a lesbian. Sara and Adler had separated amicably in 2011.

Gilbert began a relationship with Linda Perry and engaged in 2013. Later in March 2014, they both got married. Gilbert gave birth to their son, Rhodes Emilio Gilbert Perry in 2015. On December 27, 2019, Gilbert filed for legal separation from Perry.

Who is Sara Gilbert?

Sara Gilbert is an American actress who received two Primetime Emmy Award nominations for the ABC sitcom Roseanne 1988-1997. She is also famous for his role in The Big Bang Theory.

Sara Gilbert was born Sara Rebecca Abeles on January 29, 1975, in Santa Monica, California. Her nationality is American and ethnicity is Ashkenazi Jewish.

She is the daughter of Barbara Cowan, mother, and Harold Abeles, father. Sara has four older siblings, two from her father’s side and 2 from her mother’s side.

Sara’s last name was from her mother’s first husband Paul Gilbert. Sara is part of her family’s third generation in show business. Sara decided to follow in her older siblings to pursue acting.

Sara graduated from Yale University in 1997 majoring in Arts.

At the age of 13, Sara landed the role of Darlene Conner, the sarcastic middle child, in Roseanne in which she was cast for 9 years and she wrote a fourth-season episode story called Don’t Make Me Over. The show’s producers juggled storylines and taping schedules to allow her to study.

Sara has appeared in numerous shows like The Simpsons, 24, Will & Grace, Law & Order: Special Victims Unit and Private Practice.

Sara returned to prime time television in the sitcom Twins on The WB network. Sara also did a recurring role on the short-lived CBS sitcom The Class as Fern Velch. Sara has appeared in episodes of the CBS TV series The Big Bang Theory for 3 years. Sara was elevated to the show’s main cast in the second season.

Sara is a co-host and executive producer of The Talk. Sara won a Daytime Emmy in 2016 for Outstanding Entertainment  Talk Show. Sara also played in the movie Poison Ivy and Riding in Cars With Boys including a featured role in Light It Up. She was also cast in short films like $30, High Fidelity. In 1998 Sara directed her own short film Persona Non-Grata.

Sara was in controversy due to her sexuality. When she broke up with her co-star Johnny and didn’t disclose the reason.