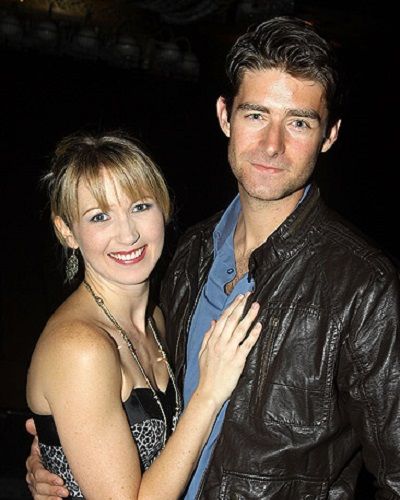 Sara is the ex-wife of the American stage and screen actor Andrew Shearer Gehling known as Drew Gehling. They walked down the aisle in the year 2009.

Their marriage was going well and they became parents to a daughter Anne Kelly Gehling. Anna was born in the year 2013.

After two years of the birth of their daughter, they decided to get divorced. The real reason for their divorce is not clear. They divorced in the year 2015.

Also read Ria Sommerfeld and her relationship and divorce from husband Tom Kaulitz!

Who is Drew Gehling dating?

After divorce with wife Sara Jean Ford, Drew started dating actress Betsy Wolfe. They met for the first time at a mutual friend’s birthday party at Glass House Tavern and were inseparable ever since.

They both acted in Waitress, Drew played the role of Dr. Pimatter, and Betsy played Jenna. When they were asked their secret to fall in love on stage, Betsy said,

“Being open and honest in the moment and not taking yourself too seriously.”

When Drew was asked about Betsy, he revealed,

“She’s funny. A sense of humor is the most attractive quality in anyone, including a co-star.”

“Being able to “fall in love” with a love interest and acting partner is the onstage ability to be very open in the moment and honest. Drew is always that. He’s so damn charming in this role. You kinda can’t help but adore him. I’m such a sucker for humor and since he’s funny on stage and off, he makes the onstage part very easy.”

But their sweet relationship did not last for long. They broke up and drifted apart. After that, Drew is currently dating Julia Mattison. She is also an actress and a writer as well. They are together and were spotted in the Broadway opening of A Christmas Carol.

Drew was raised in Sedgefield, North Carolina. He performed as a child in several shows with the Greensboro Children’s Theatre and Livestock Players Youth Theatre. Similarly, he made his Broadway debut from Jersey Boys. He played the role of Bob Gaudio.

After that, he has appeared in many TV shows which include 30 Rock, 67th Tony Awards, Smash, Elementary, The Good Fight, Succession, and others.

Also read Who is the widow of actor James Garner? Know about his health problem, death and children

Actress Juliana Harkavy divorces her husband Peter Kupchick after 6 years of wedding!
Tags : Actress The Phantom of the Opera