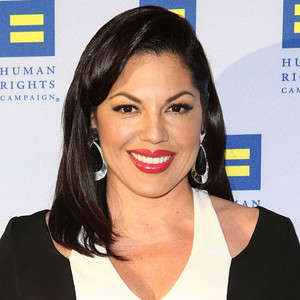 There's nothing like the first kiss once you've been pronounced husband and wife. It's such a wonderful moment!

I think, at the end of the day, acting and activism are both about empathy. You're trying to get people to see other people as real and human. And to care

When I was a kid, I really loved watching 'Cinderella.' It's a fantasy, and every girl knows that real life isn't always like these movies, but as a child, I just really loved the story of 'Cinderella.' I found it to be so romantic and just a beautiful movie to watch.

Talking about her personal life, she was in a romantic relationship with Ryan DeBolt. After knowing each other long enough they married on July 4, 2012. Even though married they are married till now, they didn’t have any children as of now.

However, she has kept her personal life private and out of the spotlight. She usually doesn’t talk about her private life in media and public. Right now, she has a strong bond with her husband Ryan DeBolt.

Who is Sara Ramirez?

Beautiful Sara Ramirez is a Mexican-American actress, singer, and songwriter. She gained a lot of fame and popularity for her portrayal as Dr. Callie Torres in Grey’s Anatomy.

Moreover, she garnered herself a Tony Award for Best Featured Actress for her role in the movie, Spamalot based movie Monty Python and the Holy Grail.

She was born as Sara Elena Ramirez on August 31, 1975, in Mazatlan, Sinaloa, Mexico. Her nationality is American and ethnicity is mixed(Mexican and Irish-American).

Her parents were Mexican father and a Mexican and Irish-American mother. Her parents divorced when she was 8. After that, she moved to Tierrasanta, San Diego, California with her mother.

Moreover, she developed an interest in music after her mother’s encouragement while she was attending the San Diego School of Creative and Performing Arts. However, she pursued a career in acting later on.

In addition, she attended Juilliard School, New York City, and graduated with a degree in Bachelor’s of Fine Arts (Dramatics).

She started her career by appearing as Wahzinak on Broadway The Capeman in 1998. In the same year, she gave her voice for a character of Lammy in UmJammer Lammy, a video game. Later on, in 1999, she landed a role in The Gershwins’ Fascinating Rhythm for which she got nominated for the Outer Critics Circle Award.

Moreover, she starred as the Lady of the Lake in the musical Spamalot based film Monty Python and the Holy Grail. Her major breakthrough came as a role of Dr. Calliope Torres in the hit TV series Grey’s Anatomy. She was the regular cast member from the third season till the 12th season of the series. Currently, she is a voice actor for the role of Queen Miranda in the series, Sofia the First.

Similarly, she has appeared in several TV series such as: “Spin City,” “Third Watch,” “Law & Order: Special Victims Unit”, “As the World Turns”, and “NYPD Blue”.

Sara Ramirez: Salary and Net Worth

During her entire career, she has always maintained top-notch professionalism over her work. Her work is always admirable and her hard work reflects on how well she is doing in her career.

She always has maintained a decent and admirable image in her entire career without attracting any rumors and controversy. Instead of attracting unwanted attention, she has worked day and night to achieve her dream and make every belief that she has no interest in becoming a controversial figure.

Sara Ramirez has an average body structure with a decent height of 5 feet 9 inches and a weight of 79 kg. Precisely, her body measurement is 39-30-40 inches, and bra size is 36C. She has black hair and dark brown eyes.