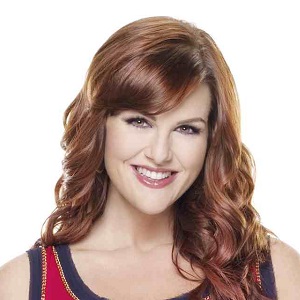 “What woman doesn't want to feel comfortable in a swimsuit? It's incredibly empowering.”

Sara Rue has been married to Kevin Price, who is a teacher by profession. The couple tied the knot on May 21, 2011, in a traditional Jewish wedding. The couple welcomed their first daughter in February 2013 and adopted another daughter in November 2016. One of her daughters’ name is Talulah Rue Price.

Who is Sara Rue?

Sara Rue is a famous and talented American actress. And she is recognized for her performance as Carmen Ferrara on ‘Popular’ and as Claude Casey on ‘Less than Perfect’. She was the host of The CW reality series ‘Shedding for the Wedding’.

She belongs to the Jewish family. She collects and plays vintage guitars. She enjoys gardening and taught to drive by Debra Jo Rupp.

She has not provided any information regarding her university and college names.

She debuted her acting career in the film ‘Rocket Gibraltar’ as Kevin Spacey’s daughter. The, she starred in the comedy m’Grand’ and later worked on ‘Phenom’, ‘Minor Adjustments’, ‘ER’, ‘The Division’, and ‘The Popular’.

She portrayed the main role of Claude Casey on the ABC sitcom ‘Less than Perfect’ and later made her appearance in the films ‘A Map of the World’, ‘A Slipping Down Life’, ‘Gypsy 83’, and played the part of a baby sitter in the film ‘The Ring’. She made her impression which was caught by the director Micahel Bay and a role as a writer for her into the movie ‘Pearl Harbor’.
Her other film roles include as Mike Judge in the film ‘Idiocracy’ in 2006, as Berta’s pregnant youngest daughter in ‘Two and a Half Man’, ‘Man Maid’, ‘For Christ’s Sake’, and recently as Sam in ‘Miss Dial’ in 2013.

She became the member of ‘Rules of Engagement’ in a recurring role as Brenda in October 2010 and it was announced in December 2011 that she would be writing and starring in a new show called ‘Poseurs’ on The CW. She portrayed the main character Dora in the TV Land comedy ‘Impastor’ but the season was canceled after the second season in 2016. She appeared as Nell in the episode ‘The Roundup’ in the series ‘The Rookie’ in 2018.

She was awarded Ashland Independent Film-Award in the category Best Acting Ensemble: Feature for ‘Man Maid’ in 2009, Special Jury Prize for the performance in ‘A Slipping-Sown Life’ in 2004, and awarded LA Femme Filmmaker in the category Comedic Actress Award in 2013.

There was a rumor that she has split from her husband but it was just a hoax as she is currently with him and enjoying her married life.