Sara Wells is an American actress who appeared in the song Californication. Sara is married to Noah Wyle since 2014. The couple has one kid. 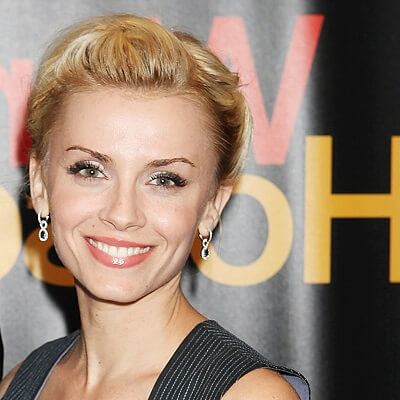 Sara Wells is a married woman. She is married to actor Noah Wyle.

The couple met in 2011 at a production at The Blank Theatre Company. Since then, they started dating and after three years, the couple exchanged wedding vows on June 7, 2014. The small yet beautiful ceremony took place at their ranch in Santa Barbara, California, and their honeymoon was in Paris which her husband confirmed.

After a year, Sara gave birth to their daughter Frances Harper Wyle on June 22, 2015. She also has two step-children from her husband’s first marriage, Owen Strausser, and Auden.

Who is Sara Wells?

Sara Wells is an American actress famous for her work in Nip/Tuck (2003), Californication (2007), and Dorito-hibition! (2010). She is better known as the wife of American actor, Noah Wyle.

Sara Wells is best known as the wife of actor Noah Wyle. However, she herself has a handful of acting credits to her name, too. She made her debut in television in the TV series, ‘Californication’ as the ‘Girl with Ferrari Guy’. Her only appearance came in an episode in 2007. The series is about a writer who tries to juggle his career, his relationship with his daughter and his ex-girlfriend in addition to his appetite for beautiful women.

Her next appearance came in 2010 in the TV series, Nip/Tuck. The series was described as dark and twisted trials of two plastic surgeons. Wells appeared as ‘Hot Blonde’ on a 2010 episode of the series.

The same year, she appeared in the short comedy, ‘Dorito-hibition’ as Ashley. Sara’s husband, Noah is an American actor famous for his roles as Dr. John Carter in ER for which he received five nominations for the Primetime Emmy Award for Outstanding Supporting Actor in a Drama Series and three nominations for the Golden Globe Award for Best Supporting Actor – Series, Miniseries or Television Film. Moreover, he is also famous for his portrayal of Corporal Jeffrey Barnes in A Few Good Men, Dr. Kenneth Monnitoff in Donnie Darko (2001), etc.

Wells has blonde hair and a pair of green eyes. She stands at a height of 5 feet 4 inches. There is no information about her weight and other body measurements.

Wells has not been involved in any controversies. She has been able to keep herself away from any type of controversy and scandal. So far, she has not done anything controversial in her career. Similarly, there are no rumors about her of any kind.

Sara Wells is absent from social media sites. She is not active on Facebook, Instagram, and Twitter. She likes to keep her personal life private and thus chosen to stay away from the social media world.

You may also like to read the Bio, Career, Body Measurements, Net Worth, Social Media, Relationships, and more about Faith Ford, Cash Warren, Noah Wyle, and more.