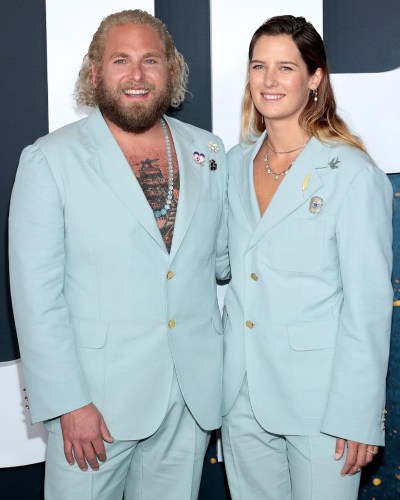 Sarah Brady and Jonah Hill are the perfect Gucci couple! They graced the premiere of Netflix’s Don’t Look Up held in NYC wearing the matching Gucci suit.

They looked like an ideal couple as they matched from head to toe in an identical light blue suit with gold buttons and turquoise loafers.

Sarah completed the look with simple jewelry including layered necklaces and used three broaches on her suit. Jonah wore a blue crystal necklace.

It is not the first time they wore matching outfits as they rocked matching clothes back in August and September. They made their relationship official on social media in September. Sarah and Jonah started dating after his split from fiance Gianna Santos in October 2020. They remained engaged for a little more than a year before breaking up.

Who is Sarah Brady?

Sarah Brady is a community engagement leader for the organization called Changing Tides Foundation. Similarly, the organization is founded by a surfing sisterhood and is a growing community of diverse collaborators with a passion for solving global challenges and creating change.

It is a women-led organization for all people striving to make a difference in the world around then, CTF celebrates diversity and inclusivity. Likewise, she is a contributor in the area of Disaster Relief/Advocacy.

Next, he will make his appearance in the movie, Don’t Look Up as Jason Orlean. Currently, the movie is filming. Read more bio…