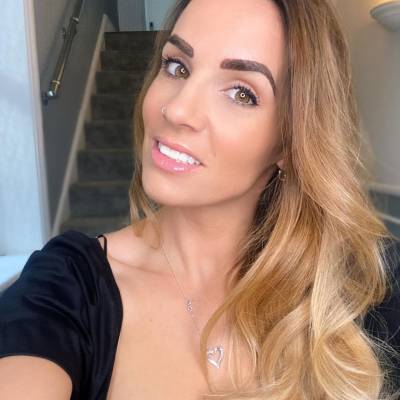 About relationship status, Sarah Conder is happily living in a married relationship with her long-term boyfriend Joel Conder. Joel is a well-known cameraperson and had his own Vimeo channel. The couple has matching tattoos portraying ‘I will Love you Forever ‘ in Spanish.

The couple met in their teen days in the year 2002 and dated for 9 years. Finally, they tied the knot on 23 April 2011. The couple lives happily with their four kids. The couple welcomed their first kid Kaci Conder on 4 June 2005.

Their family extended as they welcomed the next child, Grace Conder on 29 October 2007. Sophie Conder became the next member of the family who was born on 31 January 2012. Finally, Sophia gave birth to her 4th kid Chloe Conder on 13 January 2018.

Who is Sarah Conder?

Sarah Conder is a well-recognized British-American social media personality. Conder is widely famed as the matriarch of the family channel “Dad V Girls”.

Also, the entire family is popular to be YouTube stars and has earned huge fame in the present time.

Sarah Conder was born on 15 September 1986. At present, her age is 34 years old. Likewise, her birthplace is England.

Sarah is the daughter of her mother Roz Biddle. Not known about his father, she has been secretive about her father’s details. Moreover, it is known that the renowned personality has six siblings, three sisters, and three brothers. One of her younger brothers died at the age of 19 years old.

Talking about her nationality, Conder holds a British identity whereas her ethnicity is Caucasian.

Regarding education, the personality has not mentioned her educational details in the background till now.

Formally, Sarah is a well-recognized social media personality. She has earned popularity as the matriarch of the family featured on the YouTube channel named Dad V Girls. The channel consists of family challenges and vlogs. The family YouTube channel was created on 9 November 2017.

The channel has more than a 1.3million subscribers at the present. The viral video and series are named “Will They Cheat?!- Hidden Camera Games”. Moreover, it featured many contents like Q&As, challenges, routines, vlogs, pranks, and DIYs among others.

Also, in the family channel, the girls participate against their father/ husband in many games and challenges. Currently, the channel has earned more than 406 million. The channel featured its first post on 13 March 2018 titled Dad V Girls Jibber Jabber Challenge. The video earned more than 338k views as well.

Further, the channel started to upload various challenges, pranks, vlogs, make-up, and food videos as well. The top watched video on the family channel is named “WILL THEY CHEAT?!- HIDDEN CAMERA GAMES- PART 1”. It has more than 14 million views since 9 April 2018.

Famous personality, Sarah has earned decent money from her profession. She has been involved in the brand endorsement as well. She has promoted brands like River Island and Luxury Rural Retreats Herts.

It is reported that Sarah Conder has an estimated net worth of $3 million.

However, the popular personality has not disclosed her exact salary, earnings, and assets details till now.

Sarah Conder has never been part of any controversial matter or rumors till now.

34 years old personality, Sarah Conder has a beautiful look as well as a charming personality. Sarah stands at a height of 5 feet 8 inches. Also, she has a balanced body weight of 55 kg.

Furthermore, Conder has hazel eyes whereas her hair is blonde. Her body size is 24-26-35 inches (chest-waist-hip) respectively.

About her social media presence, Sarah Conder is an active personality on social media. Sarah has more than 260k followers on her official Instagram account @sarahconder.

She also owns a family YouTube channel named ‘Dad V Girls’ and it has more than 1.13 million subscribers. The channel was created on 9 November 2017.