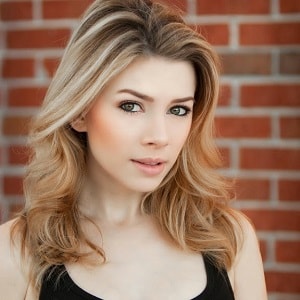 Sarah Daniels has been married to her long-term partner and fellow actor Skye Scott, who is an actor and musician.

The couple tied the knot in September 2018. The pair met the very first time during their work on ‘Frozen on Broadway. They engaged in October 2017 before they tied their knot.

The couple is living their blissful life.

Who is Sarah Daniels?

Sarah Daniels is an Ameican actress and singer. She is known for the role of Sophie in the stage production ‘Mamma Mia!’.

She was born on August 1, 1989, in Orlando, Florida, USA. She is currently 29 years old. Her father’s name is John and her mother’s name is Adrienne. She has got a sister named Alyssa and grew up with her in Celebration, Florida.

She was offered her first national tour in ‘Bear in the Big Blue House Live’ at the age of 12. The tour was for nine months from eastern to the southern US.

She is interested in photography and writing. Sarah holds American citizenship but her ethnicity is unknown.

She was enrolled in dance lessons from the age of three and she continues with today. And, she graduated from The Manhattan School of Music in the year 2014.

She started performing at The Walt Disney Resort at the age of 16. After that, she performed in shows all over the US throughout her professional career.

Her film role includes as Merry Villager in the short film ‘Frozen on Broadway: First Look’ in 2014. She portrayed the leading role of Elle Woods in ‘Legally Blonde: The Musical’ and performed in ‘Merrily We Roll Along’.

She made her recurring role as Sachez/Rubin/Caldwell in the television series ‘OFF! A New Internet Comedy’ in 2016.

Recently, she has also stepped her shoes in the field of the director, Stage manager, Producer, Music Director, and many more. She has made a plan to extend her own studio and educate the upcoming generations with skill sets she has.

She has not been awarded and nominated in her work till date. But, we can hope that she will win awards for her performance in different film and television roles.

She has not disclosed any information regarding her net worth, income, and salary. However, it is under review.

She has maintained her celebrity status till date and has not been involved in any rumors, scandals, and controversies in her professional and private life.

Sarah has got blonde hair and dark brown eyes. But, other information regarding her height, weight, body measurement, etc. is unknown.