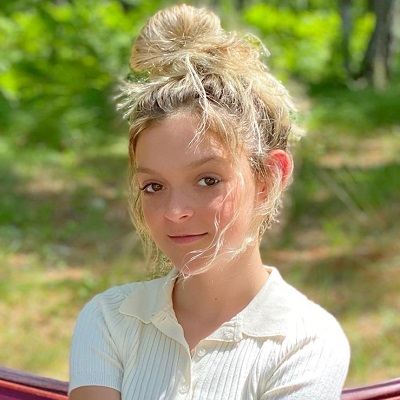 However, on her YouTube channel, she did mention that she had a crush on her friend, Stefan Benz. Also, she played a prank to Stefan by sending a text.

After that, they decided to go for a date. Due to the COVID-19 situation, they date via a video call. On the date, Stefan sang a song for Sarah which he wrote himself.

Who is Sarah Dorothy Little?

American Sarah Dorothy Little is an actress and social media star. She is renowned for her social media posts on Instagram, YouTube, and TikTok that went viral.

Last, in 2020, she appeared in the mini-series, Sisters as Sarah. Next, she will appear in the movie, The Girl on the Mountain as Melody Ward. As of now, the movie is being post-produced.

Sarah Dorothy Little was born on the 12th of December 2007 in the United States. She is of French ethnicity with Greek roots. As of Septemeber 2020, she is 12 years old. Also, her zodiac sign is Sagittarius.

Till date, she has not shared any details on her family background regarding her mother and father. However, her mother goes with the name Pam Little on Sarah’s social media account.

She has two brothers; Luke and Kaiden. Her brother, Luke is eight years elder than her. Also, details on her academics are not available. Probably, she is attending her Middle school.

Sarah Dorothy Little started her social media career with her YouTube channel that she created on 10th of February 2017. The YouTube channel happens to be the result of her passion for video making. Also, the channel is mostly based on beauty tips and tricks, challenges video, and skits.

She uploaded her first video on the 24th of December 2018 with the title, Sarah Dorothy Little as Mini Gabi Demartino. Furthermore, she started uploading her challenges and beauty videos that earned the attention of the audience. As of now, her YouTube channel has around 126k subscribers with more than 5.3 million views.

Along with her YouTube channel, she has also received an immense number of followers on Instagram and TikTok making her a social media star.

After her successful career as a social media star, she started making her appearance in the music videos, Her debut video, Beautiful People – Gavin Magnus Cover Ft. Coco Quinn got released in 2019. In the video, she shared the screen with the music artist like Coco Quinn, Gavin Magnus, and Corinne Joy.

Subsequently, she featured her first TV series, Sisters as Sarah. As of now, she is busy with her upcoming movie, The Girl on the Mountain.

Besides that, she also makes through brand promotion on Instagram.

Sarah Dorothy Little has brown eyes with blonde hair. She has a decent height and an average weight.

As of now, she has not been through any sort of controversy and scandals that created a buzz in the media.

However, there are many rumors and speculation regarding her romantic relationship.

You may also read the bio of Rachel Bush, Daviana Fletcher, and India Oxenberg.