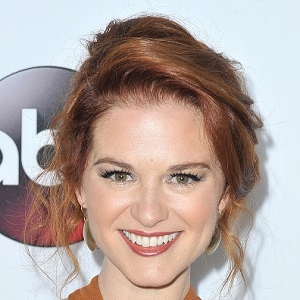 You can't be emotional if you're trying to be a businesswoman

The reason I love Jesus because he's a really good guy. He's completely opposed to running around and judging people

I've definitely had my fair share at shaking my fists at the gods of Hollywood, but I'm learning that I cannot think that way or I will go crazy.

Sarah Drew is a married woman since a long time. She is married to her long-time boyfriend Peter Lanfer, a lecturer at UCLA. The couple dated each other for several years before getting married. Their affair turned into marriage on 2 July 2002. The couple had their first child, a son named Micah Emmanuel on January 18, 2012. Sarah gave birth to her 2nd child at age 34, a daughter named Hannah Mali Rose Lanfer on December 3, 2014. The couple has been married for almost 15 years now and their relationship is still going well. She is living a happy life with her husband and children and there is no sign of separation at all.

Who is Sarah Drew?

She is the daughter of Dr. Jeannie Drew and Rev. Charles Drew. Her mother is a teacher at an independent private school for girls in Manhattan and her father is the senior pastor at Emmanuel Presbyterian Church in New York City.

Her brother, Allen Drew, is a pastor at Mt. Airy Community Church in Philadelphia and director of a cappella group at Germantown Friends School.

She attended the University of Virginia and graduated with a bachelor’s degree in drama in 2002. She was interested in acting since her childhood and she wanted to pursue her career in acting filed at an early age.

Sarah began her career while she was in high school. Her first work in the industry was voicing the character Stacy Rowe on the animated series Daria in 1997.

She also voiced that character in the Daria television films Is It Fall Yet? She made her professional stage debut as Juliet in Romeo and Juliet at the McCarter Theatre in Princeton, New Jersey in 2001. Her first movie role was as Mary Helen in the 2003 film Radio.

From 2004 to 2006, Drew starred as Hannah Rogers in The WB drama series Everwood. She later guest-starred on Cold Case, Law & Order: Special Victims Unit, Medium, Castle, Glee, Supernatural, and Private Practice. She also had a recurring role as Kitty Romano in the AMC drama series Mad Men. In 2009, she was cast as Dr. April Kepner in the sixth season of the medical drama series Grey’s Anatomy. Since then, she portrays the role of Dr. April Kepner in the series.

Sarah Drew appeared in the television series Supernatural and Miami Medical in the year 2010.  The same year she also made her appearance in the movie Tug playing the role of Ariel. Headlights, Moms’ Night Out, Waking Marshall Walker are some of her movies lists. Recently, she has also made her appearance on the 2017 movies Indivisible where she portrayed the character of Heather Turner. The movie is in the stage of post-production and has not been released yet.

Sarah has been a successful actress in her career and she has accumulated a net worth of 3 million dollars.

There is no rumor of her present love affairs. She has been a straight person in her life and she has not been in any controversy in her entire life.

Moving towards her body measurements, she has a height of 5 Feet and 4.5 Inches (1.64m) with body weight 54kg. She has blue eyes and her hair color is brown.