Filipina singer Sarah Geronimo is also known for being an actress and record producer. She is happily married.

They got engaged in November 2019. Three months after their engagement they secretly got married at a Christian wedding at Victory Church, The Ford past six in the evening. It was a Thursday night and their wedding was officiated by Senior Pastor Paulo Punzalan on 20th February 2020.

Likewise, they were spotted shopping for their new home after marriage. They are together since 2014. 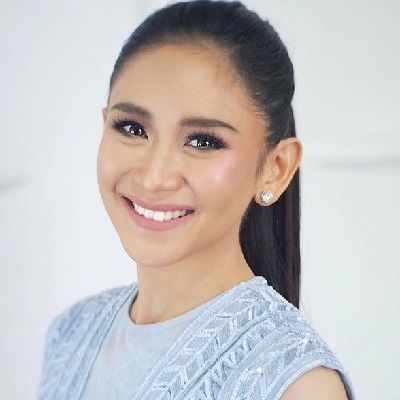 Who is Sarah Geronimo?

Filipina singer Sarah Geronimo is also known for being an actress and record producer. Sarah is the winner of 28 Myx Music Awards.

She works under the record label Viva Records and Star Music. Similarly, Sarah is the coach of The Voice of the Philippines.

Sarah Geronimo was born as Sarah Asher Tua Geronima on 25th July 1988 in Santa Cruz, Manila, Philippines. She is the daughter of Delfin Geronimo and Divina Geronimo.

Her father is a retired Philippine Long Distance Telephone Company-employee. Similarly, her mother used to run a beauty salon in their house. Sarah is the third of four children. Her siblings are Sunshine Grace Geronimo, Johna Rizzie Geronimo, and Ezekiel Gabriel Geronimo.

Sarah attended the Dominican School Manila in Sampaloc, Manila. After that, she educated from the University of Santo Tomas Education High School.

Later, she completed her secondary education from Angelicum College. Likewise, she enrolled in an Associate in Arts program at the University of the Philippines Open University in Los Banos, Laguna, Philippines.

Sarah started singing publicly from the age of two and when she was 4 years old, she was supported by her mother to join auditions for different TV programs. In the year 2002, she competed in the singing contest Star for a Night. Sarah won 1 million pesos as a grand prize.

In the year 2003, she released her first album Popstar: A Dream Come True. Her other albums with their release date are listed below.

Sarah has worked in a number of films and series. She was part of movies like Filipinas, Annie B, A Very Special Love, Hating Kapatid, It Takes a Man and a Woman, Maybe This Time, Miss Granny and Unforgettable.

Her roles in TV series include in Penpen De Sarapen, SOP, ASAP, Little Big Star, Popstar Diaries, The Voice Kids and others.

Likewise, Sarah bought a new house recently. She made part of the movie Unforgettable which made box office collection of 150 million PHP which is around $2,939,409 US.

On 20th February 2020, Sarah was rumored to be getting married that day with her fiance Matteo Guidicelli. But Sarah was on the shoot of The Voice Teens. The information about them getting married is true as they secretly got married.

There were also rumors going around that her mother was against their marriage and took her life. It was a false rumor which later got dismissed.

Sarah has dark hair and grey eyes. Similarly, she is 5 feet 4 inches tall and weighs around 57 kg. Her bra size is 32B and her dress size is US 2.

Dillon Lane
Tags : Singer The Voice of the Philippines