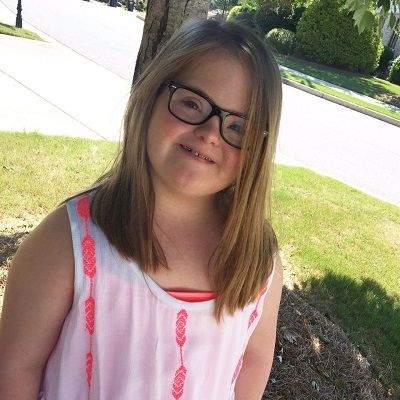 She has a very strong bond with her family and especially with her siblings. As the youngest member of the family, she is loved and cared for.

Her brothers take care of her all medical expenses which are very expensive. The cover song of True Colors by MattyB is dedicated to her.

Who is Sarah Grace Morris?

Sarah Grace Morris is an American YouTuber. Morris is renowned as the younger sister of YouTube sensation rapper, MattyB.

Sarah Grace Morris was born on the 30th of January 2006 in Atlanta, Georgia.

Her father, Charles Blakey Morris is  CEO of North American Autonet. Her mother, Tawny Morris manages her social media. They are of British- Scottish ancestry.

She is the youngest among her four siblings, Blake, John, Matthew David, and Josh. Her elder brother, Matthew is a famous rapper, MattyB.

Her cousin is a YouTube star and rapper, Charles Manning, who is renowned as MarsRaps.

Sarah is battling against, Down Syndrome by birth. Later, she attended Gwinnett County school in Georgia. The school management decided to transfer her to a special school. Her parents fought against the school’s decision to isolating her and sued them in court.

However, in 2016, the court decision was against her and emphasized the special accommodation for her normal education. After the court’s decision, she joined private schooling.

She often makes her appearance on YouTube with her brothers, Josh and Matthew during the videos where they are awarding people about Down Syndrome.

With the videos, she brought out different issues that she has to face day to day activities. Her single story is very inspiring for the people who are suffering from the syndrome. She also appeared in the video, Sugar Sugar along with MattyB

Apart from all this, she is very good at her studies and loves to play soccer and baseball. Acting and dancing are some of her favorite activities and she is a very enthusiastic person.

She has an estimated net worth of $100k US. As a YouTuber, her earnings per video in around $1.6k US. Apart from that, she also earns as Instagrammer.

Her brother, MattyB’s net worth estimated to around $3 million US.

She has a YouTube channel with the name SarahGraceClub. The channel has  608k subscribers and 134 million views.