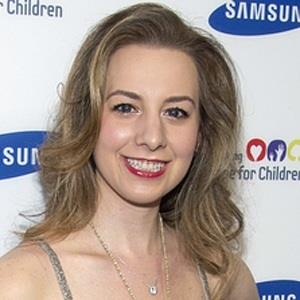 If you look at any of the women Fortune 500 CEOs, all of them played sports as a child.

I've seen the impact that sports have on young girls. I have 8-year-old nieces

they love to skate and do sports and because they have the opportunity to do it, it's helped their self-esteem and confidence.

I skated for pure enjoyment.

What is the relationship of Sarah Hughes?

Sarah Hughes is possibly single. There isn’t any solid proof that leads toward her married life and children.

Previously, she was in a relationship with Andrew Giuliani, the son of the former mayor of New York City Rudy Giuliani.

There isn’t other information about her being in a romantic relationship that we know of. Her personal life isn’t in the limelight as her career path is.

Who is Sarah Hughes?

Sarah Hughes is an American former figure skater. She started skating at the age of three. She won a gold medal at the 2002 Salt Lake City Olympic Games in the Singles category.

In addition, she is also an advocate for breast cancer awareness.

The daughter of John Hughes (father) and Amy Pasternack (mother), Sarah was born in Great Neck, New York. She was born on 2 May 1985 and named Sarah Elizabeth Hughes.

Sarah has five brothers and sisters namely, David, Matt, Emily, Taylor, and Rebecca. She is the fourth child. Her father was one of the undefeated Ivy League hockey captains.

She has an American nationality and she has a mixed ethnicity of Irish and Jewish. Her mother was diagnosed with breast cancer when she was 12. Since childhood, she has built up a strong interest in skating.

Her younger sister Emily is also a figure skater and competed at the 2006 Winter Olympics. One of her older brothers names is Matt is an NYPD officer. Sarah is also related to Gregg ‘Opie’ Hughes, from the Opie & Anthony show. Gregg is her cousin.

Sarah studied at Great Neck North High School and attended Yale University. She received a bachelor’s degree in American studies with a concentration in U.S. politics and communities. Likewise, she also studied at the University of Pennsylvania Law School.

Talking about the career journey of Sarah Hughes, she began her skating by being choreographed by Robin Wagner.

She qualified for the 2002 Winter Olympics winning the bronze medal at the 2002 U.S. Championships. She became the only American woman to achieve the Olympic title without ever winning the World or U.S. senior national title.

She defeated Michelle Kwan in the Olympics. Then, she was honored with a parade in her hometown of Great Neck.

Furthermore, Hughes is also a philanthropist who is active with several social causes and sports organizations including the Women’s Sports Foundation.

Hughes got selected as the March of Dimes Sportswoman of the Year. In 2002, she received the 2002 Sullivan Award, an annual award honoring leading amateur athletes.

Richard Krawiec has written her biography Sudden Champion: The Sarah Hughes Story in 2002. In 2003, she was inducted into the National Jewish Sports Hall of Fame.

How much is the net worth and salary of Sarah Hughes?

There were rumors that Sarah is not a normal kid. Despite having such a complicated childhood, she could catch anything very quickly.

Had she been towards music, she would be doing good in that and the same with the other field. She suffered controversy when she won the 2002 Salt Lake City Olympic game.

She fell into this controversy because many thought she did not deserve to win against her competitor Kwan.

What are the body measurements of Sarah Hughes?

Sarah Hughes has a height of 5 feet 5 inches tall and weighs 122 lbs.

She keeps dying her hair into blonde, golden, and brown and her eye color is deep blue.

Nikki Sanderson is defending dating affairs with once married boyfriend