Has won a number of highly acclaimed accolades. These include Screen Actors Guild Award and Critics Choice Television Award.

Sarah Hyland is currently dating Wells Adams, radio personality and former contestant on The Bachelorette and Bachelor in Paradise. The pair got engaged in July 2019.

Their wedding was postponed multiple times due to the COVID-19 pandemic.  Now, the couple is expecting to get married in the year 2022.

Sarah was in a relationship with an actor Matt Prokop. The two actors began dating in 2009. They reportedly met during the High School Musical 3: Senior Year audition. 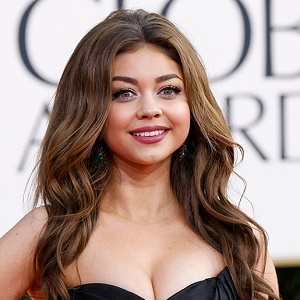 I wish I was taller or curvier, but I'm happy with the way I look.

I would say at times I am a 'Glamoholic.' But I am definitely more laid back than glamorous.I think it takes a lot of effort and sometimes I just want to be in jeans.

I think success right now is not about how famous you are or how much you're getting paid, but it's more about if you're steadily working and you're happy with what you're doing.

Who is Sarah Hyland?

Sarah Hyland is famous for playing in prominent movies such as Struck by Lighting, Vampire Academy, Scary Movie 5, and XOXO.

Sarah Hyland was born in Manhattan, New York. She is the daughter of actor Edward James Hyland and Melissa Canaday. She stepped in her parent’s footsteps and her future career in acting at the age of 4.

At such tender age, she worked in commercials and voice over’s. Raised in New York, Sarah was homeschooled until 2nd grade by her mother.

Later, she attended Professional Performing Arts School and graduated in 2008. After completing her education, she moved to Los Angeles to pursue a career in acting.

Sarah started her official career in acting at the age of 18. She received a role as a pilot in My American Family or her name changed to Modern Family. Sarah still persists in the series. She has won multiple awards for the series.

Sarah had appeared in a multitude of movies and television series before debuting in Modern Family. At 11, she made her stage debut at Papermill Playhouse in Millburn.

In addition, she played in stage production such as Bad Girls, Dark Part of the Forest, Grey Gardens, and Jackie Bouvier. Her performance in Grey Gardens received positive feedback.

This helped her bag a number of movies in her career later. In her early career, Sarah has worked with top talents like Tim Robbins, Ian Holmes, Lindsay Price, and Kim Raver among successful incredible talents.

Years later playing Haley Dunphy on Modern Family, Sarah has won consecutively Screen Actors Guild Award for Outstanding Performance by an Ensemble in a Comedy Series from 2011 through 2014.

Alongside the series, she also jumped into the movie career. In 2012, she appeared in Struck by Lighting and the same year announced to be part of a Nintendo ad campaign.

Having won a number of achievements and running a career-high time of life, Sarah undeniably is a talented actress in the industry. To date, Sarah has done a number of stage acts and appeared in series and movies.

Sarah was appointed as the new creative director and co-founder of Source, a line of chocolate-infused vitamins in October 2021.

Also, Hyland will host Love Island USA on Peacock in 2022. In addition, she will appear in Pitch Perfect: Bumper in Berlin.

This all makes her on the high-earning celebrities list. As of recent statistics, Sarah Hyland has an estimated net worth of $24 million as of 2022.

Sarah was diagnosed with kidney dysplasia in 2000. After struggling with the disease for nearly 12 years, she underwent kidney transplant surgery in 2012.

Her father Edwards had donated his kidney to her. She is better now but gets side effects from the medicines she is forced to use for preventing the kidney transplant.

There was a rumor that she and her ex-boyfriend Matt Prokop broke up because of Prokop’s assault on her.

As per the news, Prokop even used to threaten her which granted a temporary restraining order against him.

She was troubled by body shamers and trollers and she had ashed back at them in May 2017. She has not been involved in any major controversy in her professional or personal life.

She has a height of 5 feet 2 inches and a weight of 49 kg which is recently fluctuating due to her medicines post-kidney transplant.