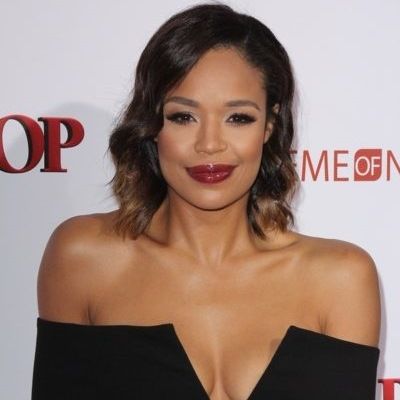 Sarah-Jane Crawford dated Joe Joyce, who is a professional boxer. The couple is very much in love and is seen together spending holidays and vacations together.

Previously, she shared a romance with Ross Harland, but the relationship came to an end.

Currently, Sarah is in a relationship with Brian Barry-Murphy. This couple has welcomed their first child (daughter) in Aug 2020.

Sarah has previously suffered a miscarriage.

Who is Sarah-Jane Crawford?

She is best known for her radio work with Hits Radio and formally with BBC Radio 1Xtra, and television work with E! Network (which she is currently a host for), ITV2 on The Xtra Factor, BBC and Channel 4.

Likely, Crawford has also presented and appeared a number of shows for the Disney Channel and MTV. Crawford has been a vegan since 2015 and is releasing a vegan app called Viappi in November 2017.

Sarah-Jane Crawford was born in Lambeth, South East London on  July 15, 1981. Her father’s name and mother’s name is unknown. She is very close to her parents whom she considers her greatest inspiration.

There is no information about her siblings.

Talking about Sarah’s education history, she went to schools at Dulwich Hamlet, Bessemer Grange, and Sydenham Girls’ School before she moved to Cambridgeshire for her remaining years of secondary school education.

Sarah went to Kingston University and Anglia Ruskin University before becoming a television presenter. She graduated with a degree in Marketing.

Talking about her profession, Sarah-Jane Crawford began her TV career on Shipwrecked 3 on Channel 4 but began presenting in 2007 when she hosted the Red Carpet and Back Stage show of the Vodafone Live Music Awards for The Hits music video channel, now known as 4music.

In the year 2007, Crawford joined the presenter line-up for the E4 Music Zone and Freshly Squeezed for Channel 4 and as a result, she has interviewed the likes of Robert De Niro, Usher, Nicole Scherzinger, the Pussycat Dolls, Natasha Bedingfield, will.i.am, Colin Farrell, Kate Hudson, Ewan McGregor, Jerry Seinfeld, Sarah Jessica Parker and Renée Zellweger for Channel 4.

Similarly, in September 2010, Crawford appeared with Jonathan Ross and Ant and Dec, on the Nintendo TV advertisement celebrating 25 years of Mario. On 30 August 2014, Crawford replaced Caroline Flack and Matt Richardson as the presenter of The X Factor‘s ITV2 spin-off show The Xtra Factor. In October 2014 Crawford hosted the MOBO awards with Spice Girl Mel B on ITV2.

On 19 May 2018, Crawford was also a co-presenter of E!’s royal wedding coverage of Prince Harry and Meghan Markle’s wedding live from Windsor Castle alongside Giuliana Rancic, Melanie Bromley, and Brad Goreski.

On 11 September 2012, Crawford also appeared on BBC Radio 1’s Innuendo Bingo. In addition,  Crawford has stood in for Aled Jones on occasions to present the Surgery on BBC Radio 1, and in January 2014, she co-hosted a special show on ‘Happiness’ with him.

She played the part of single mother Lorna. In July 2016 Crawford also starred in the film The Hatton Garden Job played the part of DCI Emma Carter alongside Matthew Goode, Joely Richardson, and Larry Lamb. Made in 2016, the film was released on April 2017.

Therefore, she appeared on the cover of Pride magazine in 2014. In June 2015 Crawford also became the face of Brazilian flip flop brand Ipanema for a summer campaign. During 2015 Crawford signed to Select Model Management to their celebrity division.

During 2016, Sarah was diagnosed with breast cancer and underwent surgery on her right boob, but the cancerous cell was again found on her left breast.

Even though the incident was traumatic for her, she fought the disease vigorously and is now healthy. Despite fighting one of the scariest diseases on the planet, she did not give up and kept working on her career.

Sarah-Jane Crawford has a height of 5 feet 8 inches and she weighs 59Kg. Her hair color is black and her eyes color is dark brown.

But, she doesn’t have an official page on her Facebook.

Also get to know more about Ruth Langsford, Ant Anstead, and Jenny Powell.