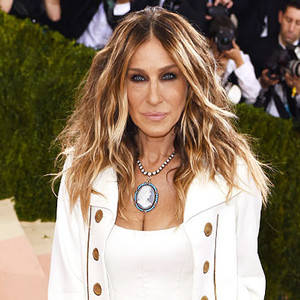 Maybe our mistakes are what make our fate

In a relationship, when does the art of compromise become compromising?

I don't judge others. I say if you feel good with what you're doing, let your freak flag fly.

One of the successful American actress, producer, and a designer Sarah Jessica is married to Matthew Broderick since 1997. As she is one of the beautiful looking ladies, she was been in relation with Nicolas Cage in 1991. At the same year, she dated John F. Kennedy. Early in the 1990s, she was been in a relationship with Joshua Kadison. Although all her relationship status was weak now she is happy with her husband Matthew Broderick, they both are enjoying their love life and they both look great together.

Who is Sarah Jessica?

Sarah Jessica is an American actress, producer, and a designer.  She is known for the leading role as Carrie Bradshaw on the HBO television series Sex and the City in 2008 and  Sex and the City 2 in 2010. She is one of the brilliant actresses who has achieved  Emmy Awards for ” Outstanding Comedy Series” as a producer and another for Outstanding Lead Actress in a Comedy Series.

Sarah Jessica was born on  March 25, 1965, in Nelsonville. She was the daughter of  Barbara Parker, who is a nursery school operator and teacher, and Stephen Parker, who is an entrepreneur and journalist. After the divorce of her mother and father, her mother decided to get married with Paul Forste, Who is a truck driver and account executive. She was one of a total of eight children from her parents.

Her family moved to Englewood, New Jersey. She studied at  Dwight Morrow High School. At NewYork, she was trained in  School of American Ballet. She also attended Professional Children’s School, Performing Arts in Cincinnati, and Hollywood High School in Los Angeles.

Sarah Jessica started her career when she was young. She and her four siblings were part of  The Sound of Music in St. Louis, Missouri. She was also selected in the role for new 1977–81 Broadway musical Annie. She was also cast as the co-lead of the CBS sitcom Square Pegs. In three years she was cast in Four films like Footloose in 1984 and 1985  Girls Just Wanna Have Fun. In 1986, She appeared in the cult classic Flight of the Navigator, a Disney science fiction film.

In 1991, she appeared in a supporting role on comedy L.A. Story. She also got a starring role in  Honeymoon in Vegas, co-starring Nicolas Cage. She was a part of  Disney’s Halloween film Hocus Pocus. In 1993, played a role in the movie Striking Distance. Then she was part of the movie  Miami Rhapsody, where she got a chance as a leading role. After all her struggle in the film industry, she was featured in HBO television series Sex and the City in 2008 and  Sex and the City 2 in 2010. By these, she got a massive fan following in different social medias. By focussing in her day to day career she has achieved Emmy Awards for ” Outstanding Comedy Series” as a producer and another for Outstanding Lead Actress in a Comedy Series. Her net worth is $90 million. Thus, with the help of her talents and appearances, she gets a decent amount of money as her income raising her net worth to a decent peak value.

Talking about the Rumors, and the controversy of the leading actress in the film industry Sarah Jessica, there was a news that the sixth season of the HBO series she was “panicked” to be locked down to a TV series likeSex and the City. She was convinced by her husband and her brother for One, jaw-dropping scene.

She has the height of 5 feet 3 inches tall and weighs 56 kg. Her hair color is dyed brown and eye color is hazel blue.

Furthermore, also find out more about the early life, career, net worth, relationships, and controversies of actress, producer, and designer like Amanda Bynes, Jenae Altschwager, and Rukiya Bernard.