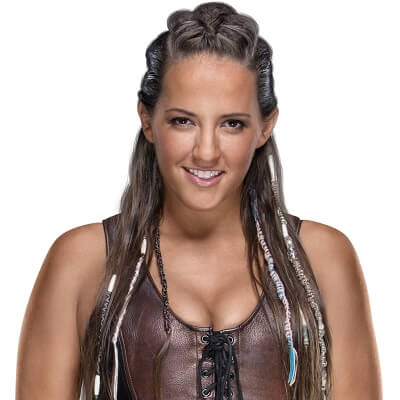 Sarah Logan is currently married to a fellow WWE wrestler named Raymond Rowe. The couple met as wrestlers in WWE. After dating for some time, they exchanged wedding vows on December 21st, 2018 in Ohio in a Viking theme. It was attended by the Riott Squad, Hanson, Jessamyn Duke, Shayna Baszler, and Tegan Nox who dressed in Viking costumes for the ceremony.

On July 6, 2020, the couple announced on Instagram that they were expecting their first child together.

Previously, she was in a relationship and engaged to Kevin Canady. He is a professional wrestler who goes by the stage name, Mad Man Pondo. However, they called off their engagement.

Who is Sarah Logan?

Sarah Logan is an American professional wrestler who made her name in the WWE as a member of the stable, ‘The Riott Squad’ with her partners, Liv Morgan and Ruby Riott. Currently, she is on a personal hiatus from wrestling.

She spent her childhood days in Louisville, Kentucky and her ethnicity is Caucasian.

On October 19, 2016, WWE announced that Logan had signed a developmental contract and a month later, on November 17, she made her NXT debut at WrestleMania 33 defeating Macey Estrella.

She got promoted to Smackdown a year later and made her debut on November 21, 2017, along with Ruby Riott and Liv Morgan, by attacking Naomi and Becky Lynch. The following week, the trio called themselves ‘The Riott Squad’ and defeated Flair, Natalya, and Naomi in a six-woman tag team match.

Logan also participated in the first women’s Royal Rumble match but Molly Holly eliminated her. During the 2018 Superstar Shake-Up, the trio was drafted to Raw. In July, she won against Ember Moon.

On February 17, 2019, she competed in an Elimination Chamber Match for the WWE Women’s Tag Team Championship but got eliminated.

Logan moved to Smackdown in April and on November 24, she was part of Team Raw and competed in the triple threat elimination match against Team SmackDown and Team NXT. Charlotte Flair defeated Logan twice.

On the April 13, 2020 edition of Raw, Baszler defeated her in a Women’s Money in the Bank qualifying match. Unfortunately, on April 15, 2020, as a result of the budget cuts due to the Coronavirus pandemic, WWE released her.

Sarah Logan announced that she would be stepping away from wrestling for the foreseeable future on June 22, 2020.

Logan stands at a height of 5 feet 6 inches and weighs around 63 kg. She has brown hair, and similarly, a pair of brown eyes.

Sarah Logan has an estimated net worth of around $20 million as of 2021. She has made a considerable amount of money as a wrestler. However, as of now, she remains on hiatus and thus, does not have a salary.

Logan has not been a part of controversies so far. She has simply focused on her work and career. She has, however, done some controversial things while a part of WWE such as interrupting ongoing matches. But, since all these are staged, they can’t be tagged as controversial. Similarly, there are no rumors about her.

The professional wrestler is active and popular on social media sites. She has around 185.7k followers on Twitter and around 554k followers on Instagram. However, she seems to be absent from Facebook.

You may also like to read the Bio, Career, Net Worth, Relationships, and more about Paige (wrestler), Michelle McCool, Enzo Amore, and more.