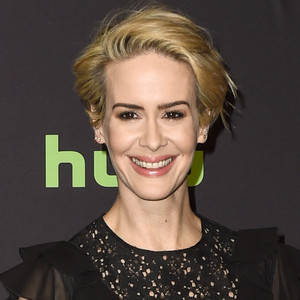 I'd love to be in the '70s. I'd love to have a big, long wig parted down the middle with flat-ironed hair and bell-bottoms. They're actually very flattering for my figure. The wider the leg, the better for a person with a booty

To not have any hope is where things start to get really bleak. Things are possible. The impossible can be possible

Cute and gorgeous Sarah is an unmarried woman. She has been in the relationship with Cherry Jones from 2005 to 2009. Currently, she is dating actress Holland Taylor since 2015. She is not associated with any divorce case yet.

Who is Sarah Paulson?

Sarah was born on December 17, 1974, in Tampa, Florida, U.S.A. Her nationality is American and belongs to mixed(English, Danish, German and French) ethnicity.

She was born to Catharine Gordon(mother) and Douglas Lyle Paulson II(father). Sarah was only five years old when her parents’ divorce and began staying with her mother in New York City. She used to spend her summer holiday in Florida with her father.

Sarah began working as an actress when she was in high school. She appeared in one episode of Law & Order titled “Horton Foot” in 1994. Next year in 1995, she appeared in T.V series “American Gothic” as ‘Merlyn Temple’ and starred in a total of 18 episodes until 1996.

It was the solid base for her to establish in the acting field.  She made her film debut in the year 1997 and appeared in the film “Levitation” as ‘Acey Rawlins’. Also, she starred in low-rated films at the initial phase of her career including “The Other Sister”., “The Other Sister”, “What Women Want”, etc.

In 2006, she appeared in T.V series “Studio 60 on the Sunset Strip” as ‘Harriet Hayes’ in the total of 9 episodes for which she was nominated for the first time in her career in ‘Series, Miniseries or TV Film Award’ in the category of Best Supporting Actress.

She has a net worth of $10 Million but her salary is not revealed yet.

Sarah often used to be a topic of rumor regarding her relationship with 70 years old actress Cherry Jones despite being only 40 years old.