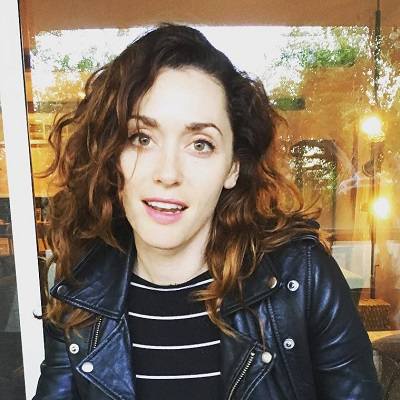 Sarah Power is happily married to Peter Mooney. Her husband is an actor, writer, and producer by profession. The couple got married on the 1st of July 2017.

Together, the couple is blessed with a daughter (b. May 4, 2019). Being protective parents, they have not shared any details on their daughter. As of now, she is leading a happily married life with her family.

Who is Sarah Power?

Canadian Sarah Power is an actress. She is renowned Angelina of Saw V, Pawter Simms of Killjoys, and Tennessee of Schitt’s Creek.

Last, in 2020, she appeared in the 7th season of the TV series, Good Witch as Abigail Pershing.

Sarah Power was born on the 29th of June 1985 in St. John’s, Newfoundland and Labrador, Canada. She is of Mixed (British, Irish, French) ethnicity.

Till date, she has not shared any details on her family members including his father, mother, and siblings.

Talking about her educational background, she joined Ryerson University‘s Theatre School. In school, she studied arts. Since childhood, she was in love with performing.

Hence, she has been dancing since those days. Later, she started taking acting at the age of 14.

In 2001, Sarah Power moved to Toronto for Canada to start her career as an actress. The following year, she entered the TV industry with the series, Random Passage. In series, she portrayed the character as Fannt.

Later, in 2007, she made a debut in movies with the film, American Pie Presents: Beta Hous. In the comic movie, she portrayed the character of Denise. The next year, he appeared in the movies; Saw V and Repo! The Genetic Opera.

After that, she mostly appeared in the TV series. Some of her TV series along with her character and the year is-

Since 2015, she is appearing in the series, Good Witch as Abigail Pershing. Last, in 2020, she completed the 6th season with the series.

Till date, she has been involved in any sort of controversy and scandals that created a buzz in the media. Besides that, she has managed to maintain the distance from any sort of rumors.

You may also read the bio of Alice Evans, Kim Caramele, and Gannon Brousseau.

Sarah Hyland is back home from hospital after treatment of health problems related to her second kidney transplantation!