Sarah Rafferty is an American actress of the legal drama, ‘Suits’.

Sarah Rafferty is a married woman. She is married to Aleksanteri Olli-Pekka Seppälä. Her husband is a stock research analyst in the asset management unit of Lazard Frères & Company.

The couple exchanged wedding vows on June 23, 2001, at the Roman Catholic church of St. Mary in Greenwich, Connecticut performed by the Rev. Alfred Riendeau.

They have now been happily married for around 19 years with no signs of extra-marital affairs. From their healthy marriage, they have two daughters, Oona Gray (born on 22 October 2007) and Iris Friday (born in January 2012).

The family of four lives on both east and west coasts and she travels back and forth to Toronto for work. 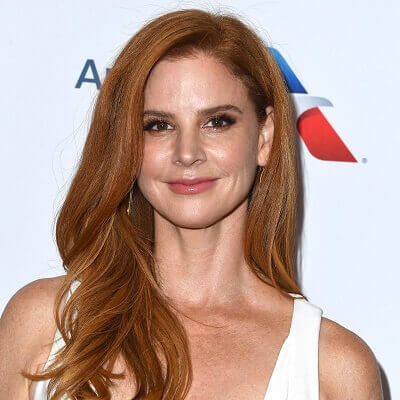 I have a sweet tooth. I love dessert, and if somebody makes me one, I'm going to have it

My husband is from Finland, so every so often I'll throw a Scandinavian-themed party

I am a huge theatre geek

What you learn from studying acting is that you have to have the courage to just make strong choices.

Who is Sarah Rafferty?

Sarah Rafferty is an American actress. She is famous for her portrayal of Donna Paulsen on the legal drama, ‘Suits’.

Sarah Rafferty was born as Sarah Gray Rafferty in New Canaan, Connecticut, USA on December 6, 1972. As of 2020, her age is 47. She was born to parents Michael Griffin Rafferty Jr. (father) and Mary Lee Rafferty (mother). Her mother served as the Chairwoman of the English Department at Convent of the Sacred Heart school whereas her father has had successful careers in finance and oil painting. Both of her parents played vital roles in her career and encouraged her to become an actress.

She is the youngest of her parents’ four daughters. She has three elder sisters named Maura, Ann. and Constance. Rafferty spent her childhood days in the Riverside neighborhood of Greenwich, Connecticut. Her ethnicity is Irish, German.

Talking about her educational background, Rafferty attended Phillips Academy in Andover, Massachusetts from where she graduated in 1989. Following that, she joined Hamilton College where she majored in English and Theatre and studied theatre abroad in the UK and also at the University of Oxford during her junior year.

Sarah Rafferty made her acting debut with the 1998 TV film ‘Trinity’. She portrayed Sarah in the television film. Following that, she made an appearance in an episode of the popular TV series, ‘Law & Order’ and ‘Walker, Texas Ranger.’ In 2003, acted in the flick, ‘Speakeasy’. The same year, she also featured in the dramas, ‘Six Feet Under’, ‘Without a Trace’, ‘The Practice’, ‘Good Morning, Miami’, and ‘Tremors’.

She gave continuity to her big-screen career with the 2004 movie, ‘Soccer Dog: European Cup’. Furthermore, she also went on to star in the TV series, ‘Second Time Around’, ‘Charmed’, and ‘8 Simple Rules’.

In 2006, a couple of years later, she landed the role of Sydney in the film ‘Falling for Grace’. She then featured in the TV movies, ‘Football Wives’ and ‘What If God Were the Sun?’ the following year.

Rafferty then made appearances in the dramas, ‘Numb3rs’ and ‘Bones’. In 2011, the blonde beauty landed one of the major roles in the TV series, ‘Suits’ as Donna Roberta Paulsen. She starred as Donna in 134 episodes from 2011-2019.

In 2020, she landed the recurring role of Suzanne in the medical drama, ‘Grey’s Anatomy’. Sarah has also appeared as Julia and Emily in the movies, ‘Four Single Fathers’, and ‘Small, Beautifully Moving Parts’ respectively.

Rafferty stands at a height of 5 feet 9 inches and weighs around 58 kg. Her body measurements for breasts, waist, and hips are 35-25-35. Her hair color is Auburn and she has a pair of brown eyes.

Sarah Rafferty has an estimated net worth of around $5 million. She has earned a good sum of money from her career as an actress. Rafferty reportedly made around $300k per episode for her role as Donna in ‘Suits’. However, there is no information about her annual salary.

Sarah has not been involved in any controversies. She has been able to keep herself away from any type of controversy and scandal. So far, she has not done anything controversial in her career. Similarly, there are no rumors about her of any kind.

You may also like to read the Bio, Career, Body Measurements, Net Worth, Social Media, Relationships, and more about Cindy Ambuehl, Lisa Niemi, Sunrise Coigney, and more.