Sarah Sanders is a campaign manager, political adviser. Sarah is married to her longtime boyfriend Bryan Sanders since 2010. They have three children.

Sanders Huckabee met Bryan Sanders during her father’s 2008 presidential campaign where she was the campaign’s field director, and Sanders was hired as a media consultant. The pair got married on May 25, 2010, in St. John, U.S. Virgin Islands.

They together had three children named Scarlett Wiles Sanders as the first child, William Huckabee Sanders as the second child and George Sanders as the third child. The husband and wife team founded the Second Street Strategies consulting firm in Little Rock in early 2016. 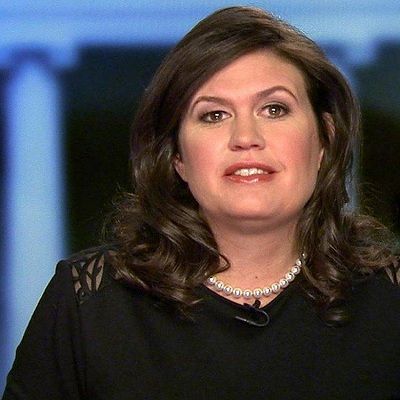 People are just looking for honesty and authenticity more than anything

I don't think you can expect someone to be personally attacked day after day, minute by minute, and sit back

I got to work for my hero and travel with him on a regular basis. It doesn't get much better than that for a job.

Who is Sarah Sanders?

Sarah Sanders is an American campaign manager and political adviser. She was the White House press secretary under President Donald Trump, also she is the third woman to fill the position.

Sanders has two brothers, John Mark Huckabee and David Huckabee. She belongs to the American nationality and ethnicity of Caucasian.

There, she was voted in student body president and was active in Republican organizations. Huckabee graduated from the university with a Bachelor of Arts degree. She took a major subject like political science and minored in mass communications in 2004.

She was a national political director for her father’s presidential campaign in 2008. Similarly, she was also a senior adviser to Tim Pawlenty in his 2012 presidential run. She was involved in the campaigns of both U.S. senators from Arkansas for managing John Boozman’s 2010 campaign and serving as an adviser to Tom Cotton’s 2014 election.

Sanders worked as executive director of Huck PAC, a political action committee after her father’s 2008 campaign. she also was national campaign manager for the ONE Campaign, aimed at ending global poverty and preventable diseases.

Sanders said that she “heard from countless members of the FBI that are grateful and thankful for the President’s decision” to fire the FBI director in May 2017. On June 27, 2017, during a press briefing, Sanders blamed the media and alleged them of spreading “fake news” against Trump.

Sanders said during a press briefing that the “president in no way, form or fashion has ever promoted or encouraged violence” on June 29, 2017.

On July 21, 2017, following Spicer’s advertised that he was going to resign. In the same way, Director Anthony Scaramucci who is newly appointed White House Communications announced that Sanders would take the role of White House press secretary.

Furthermore, President Trump’s lawyers wrote to the special counsel investigation that “the President dictated” in January 2018. During the 2018-2019 government shutdown caused by Congress’s ban to fulfill President Trump’s appeal for $5.7 billion in federal funds for a U.S.–Mexico border wall.

Moreover, Sanders said on the Christian Broadcasting Network that she thinks “God calls all of us to fill different roles at different times, and  I think that he wanted Donald Trump to become president” in January 2019. On June 13, 2019, President Trump tweeted that Sanders would be moving her role as press secretary for his administration on June 30.

Though she is an amazing Political adviser there is no information that she has received many awards and nominations.

Sarah Sander’s net worth is around to be $2 million as of 2022. There is no information regarding her income and salary.

There are rumors about her personal and professional life. The moment former White Hosue Press Secretary Sarah Sanders’ resignation was announced and the rumors began to spin around about her future plans.

Sarah Sanders is not a tall woman. Sarah is 5 feet 4 inches tall and weighs 72kg. She has black hair color and dark brown eye color. Her body measurement is 36-30-36 inches.