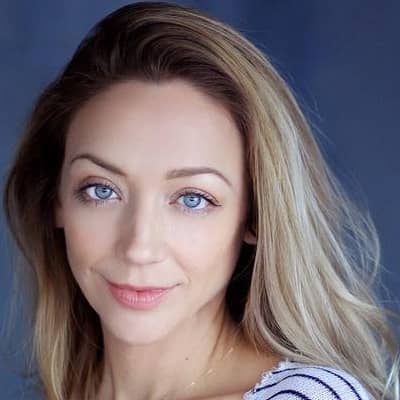 What is the relationship of Sarah Scott?

Sarah Scott is currently living a blissful married life with artist Michael Alperin. Michael is an actor and cinematographer by profession. As of 2021, it’s been over 6 years since the pair have been married.

On September 4, 2014, the couple gets married in Montauroux, France at the Chapel Saint-Barthélemy. The couple is proud parents of two children a son and a daughter.

On June 21, 2017, the duo welcomed a baby girl named Simone Soleil Alperin and they welcome their son named Marcel Paul Alperin on August 21, 2019.

Who is Sarah Scott?

Sarah Scott is an American actress, dancer, and intimacy coordinator. She is best known for her prominent role in 2009’s The Grind and 2015’s Soaked in Bleach. She has starred as Laughing Dancer in the 2012’s Academy Awards film, The Artist (2011).

Sarah was born in Lincoln, Nebraska, USA on September 28, 1983. Her birth name is Sarah M. Scott. She holds an American nationality and belongs to mixed ethnicity of French, German, Irish, Slovenian, and English.

The name of her parents is Gary Scott (father) and Marion Scott (mother). She has also two younger sisters and one older brother but she hasn’t yet disclosed their identities in the media.

Moving towards her academics, she attended Colleyville Heritage High School. Afterward, she joined New York University and graduated in 2002 with a Bachelor of Science in Mass Media Communications and a Minor in Ballet.

Sarah has trained in jazz from an early age and joined a competitive company at the age of 13. After graduation from University, she did an internship with New Line Cinema. She has also completed the Shakespearean Studies program at the Royal Academy of Dramatic Art.

In 2009, Sarah starred in the lead role of Alex in the crime drama film The Grind along with C. Thomas Howell, Michael Welch, Tanya Allen, and other cast members. In the same year, she was cast in the comedy-drama film The Last Hurrah where she portrayed the role of Lex. Similarly, she has carried leading roles in the films like The Devil’s Muse (2007), Sam (2017), and Desperate Waters (2019).

Currently, she served as an Intimacy coordinator, a staff member who ensures the well-being of actors who participate in sex scenes or other intimate scenes in theater, film, and television production.

Later, Pardue confessed to The Time that he is ashamed of his behavior during their scene together but he had denied the allegations that happened after the scene was completed.

According to other online sources, Sarah has an estimated net worth of $1 million as of 2022. Further, there are no details available regarding her salary, current net worth, and other earnings.

The actress has a charming personality and a fair complexion. She stands at a height of 5 feet 6 inches tall and her weight is around 55 kg. Likewise, her breast, waist, and hips sizes are 34, 27, and 35 inches.

She wears 8 (US) shoe sizes and her bra size is 33B. Sarah has blonde hair and a hazel blue pair of eyes color.

Teen Mom Bristol Palin has a new boyfriend, Janson Moore! Is her mother Sarah Palin approving of this new relationship?

EPA Administrator Scott Pruitt resigns after growing protest against his policies! He is the latest Trump official to be harassed in a restaurant!