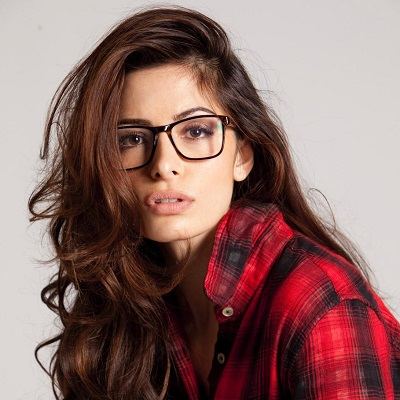 My biggest fantasy was to have a pie thrown in my face, and I always said whoever did that, that's the guy I'd marry

I know it sounds weird, but my definition of 'sexy' has changed as I've gotten older. And being smart and informed makes me feel sexier than any outfit

The most important mark I will leave on this world is my son.

What is the relationship of Sarah Shahi?

Sarah Shahi is dating Adam Demos. She met her boyfriend Adam in August 2020 on the sets of Sex Life. She is quite open about her affair with her co-star.

Previously, she was married to Steve Howey. Her former husband is an actor by profession.

They married on the 7th of February 2009 in Las Vegas. The couple is blessed with three children: their first son, William Wolf Howey. William was born in July 2019 during water home birth.

Later, they had twins, Violet Moon Howey and Knox Blue Howey in January 2015. However, the couple announced their divorce after 11 years of marriage in January 2021.

Who is Sarah Shahi?

Sarah Shahi is a TV actress. Shahi is renowned as Lisa of Bullet to the Head and Erica of Old School.

Next, in 2020, she will be appearing in Language Arts as Allison Forche-Marlow.

Her father, Abbas Jahansouz Shahi is of Iranian ancestry. Her mother, Mah Monir Soroush Azar is an interior designer to the profession.

She is the first among her two siblings. Her younger sister, Samantha is a production officer

Her ancestors belong to Fath-Ali Shah Qajar of the Qajar Dynasty. Her father, Abbas was an officer for the American Embassy in Iran. They had run from Iran due to the Iranian Revolution.

Abbas had been highly criticized at the last Shah’s regime collapsed. Her mother is of Spanish ancestry. Her parents were separated at the age of ten.

Why she changed her birth name?

Her birth name is Aahoo which means gazelle in the Persian language. The name was unusual for American society. Hence, as a child, she used to be bullied by other children.

Due to this reason, she changed her name to Sarah when she was in grade two.

She joined Trinity High School in Euless, Texas. During High School, she used to be captain of the volleyball team. Later, she graduated from Southern Methodist University with Honors in English and Theater. During the time, she used to be an active member of Alpha Chi Omega.

Since she was eight, her parents started to enter her into beauty pageants. In 1997, she was crowned Miss Fort Worth. Later, she joined Dallas Cowboys Cheerleaders hoping to be an actress.

In 2000, she moved to Los Angeles to pursue her career as an actress. There, she met the director, Robert Altman who was directing the movie, Dr. T & the Women. He highly encouraged her to move into Hollywood. For two years, she struggled in the industry for her roles.

During the time, she featured in many TV Series including Spin City, Boston Public, and Off Centre. However, her roles in those series were minor and she appeared in the single episodes only.

In 2005, she appeared in The L Word where she portrayed the character of Carmen de la Pica Morales. The show became a milestone in her career as an actress. After that, she started appearing in the TV series Fairly Legal as Kate Reed and Life as Dani Reese. Such roles in the series made her a regular face in TV series.

Besides in TV series, she also featured in TV movies. Some of them include Halfway There as Carrie Claussen, Hangman as Capt. Watson, and Guns for Hire as Carla.

She is a brown-eyed brunette. Her height is 5 feet 3 inches and has an average body mass.

In 2016, she and her husband, Steve had were sued by their former nanny, Sarah Alaseri for harassment and religious discrimination.

Alaseri was hired by the couple in 2012 as a nanny. During work, she suffered from harassment. Also, Steve used to scold and make mockery when she practiced her Muslim religion. Also, she added that Shahi was encouraged to run off with her husband as she has an affair with an actor.

Shahi also showed some photos displaying her lover’s private part. Alaseri was fired in 2015 but they owe the hasty sum of her salary.

What is Sarah Shahi famous for?

Why did Sarah Shahi leave the L word?

Did Sarah Shahi have a baby?

Why Are Steve Howey And Sarah Shahi Ending Their 11 Years Of Marriage? The Couple Finalized Their Divorce!