There is no information available about her dating history also. She might be busy with her professional and she might not have enough time to be in a relationship. 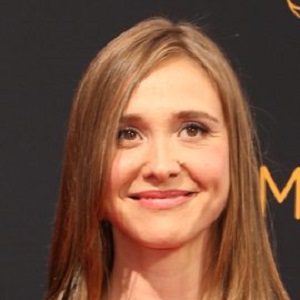 Who is Sarah Sokolovic?

Sarah Sokolovic is an American film, theatre, and television actress who is known for her role as Laura Sutton in ‘Homeland’ and for her recurring role on ‘Big Little Lies.

She has also made her appearance in plays like ‘A Streetcar Named Desire’ and ‘The Shaggs: Philosophy of the World’.

Her father is a Serb, immigrated to the USA from Germany and her mother is an American of German and English descent. She has got a sister named Stephanie and a brother named Stevan.

Sarah holds American citizenship and her ethnicity is a mix of Serbian, German, English, and Swedish.

This actress attended Yale School of Drama and graduated from there.

Before entering into an acting career, Sarah Sokolovic worked at the Milwaukee Country Zoo. Later, she started her professional career in theatre and portrayed the character, Betty, in the musical ‘The Shaggs: Philosophy of the World’ in New York City at Playwrights Horizons.

She played in ‘Detroit’ alongside Amy Ryan, John Cullum, Darren Pettie, and David Schwimmer and later performed in the ‘A Streetcar Named Desire’ at the Yale Repertory Theatre in 2013.

She debuted her film career portraying the role of Gwen, a prostitute in ‘Cold Comes the Night’ in 2013, alongside Alice Eve and Bryan Cranston. Later, she portrayed the role of maven Lytte in the film ‘Every Secret Thing’ in 2014, directed by Amy J. Berg, which was released on May 15, 2015.

She has been portraying the role of Tori Bachman on the TV show ‘Big Little Lies’ since 2017 and recently she portrayed the role of Chess girl in ‘7 Splinters in Time’ in 2018, and as Amber in ‘MacGyver’ in the same year.

She got nominates for the Screen Actors Guild Awards in the category Outstanding Performance by an Ensemble in a Drama Series for ‘Homeland’ in 2016.

Also, she was nominated for the Drama Desk Award in the category Outstanding Featured Actress in a Musical for ‘The Shaggs: Philosophy of the World’.

She has an estimated net worth of around $500,000 as of 2022,  and she has earned that sum of money from her career and it is expected to rise in the future.

The beautiful actress has maintained her celebrity status and has not been involved in any type of rumors in her career.

Sarah Sokolovic has a height of 5 ft. 10 inches and she has got light brown eyes and blonde hair. Other information regarding her weight, body measurement, etc. is unknown.

To know more about Gage Golightly, Nicole Hiltz, and Karen Finney, please click on the link.