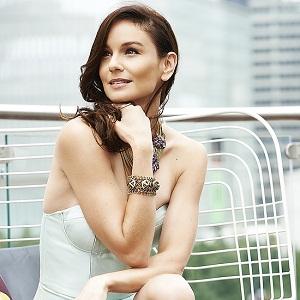 The rite of passage of learning to build a fire that will burn all night with one match is not an insignificant one in my husband's family, and I grew up camping and backpacking. I love to camp

I think I'm probably much better at the boots and pocket knife thing than I am at the high heels and martini thing.

On July 21, 2002, Callies married Josh Winterhalt, whom she met at Dartmouth. On January 23, 2007, her publicist announced that the couple was expecting their first child. Their daughter Keala was born on July 20, 2007. Their second child, an adopted son, was born in August 2013.

Who is Sarah Wayne Callies?

Sarah Wayne Callies is an American actress. She is best known for her portrayals of Sara Tancredi in Fox’s Prison Break, Lori Grimes in AMC’s The Walking Dead and Katie Bowman in USA Network’s Colony.

Callies was born as Sarah Anne Wayne Callies on June 1, 1977, in La Grange, Illinois. Her nationality is American and ethnicity is mixed(German, Czech, Ashkenazi Jewish).

She is the daughter of Valerie Wayne(mother) and David E. Callies(father), respective English and law professors at the University of Hawaii, Manoa. At age one, Callies moved to Honolulu, Hawaii with her family.

Throughout her youth, she expressed an interest in acting through participating in various school plays at the independent Punahou School.

After graduating from high school, she entered Dartmouth College in Hanover, New Hampshire. In conjunction with her studies, Callies remained involved in theater.

She continued her education at the National Theatre Conservatory, where she obtained her Master of Fine Arts degree in 2002.

Callies moved to New York in 2003 and then quickly landed her first television role as Kate O’Malley, a recurring part on the short-lived CBS show Queens Supreme. Her first starring role was as Detective Jane Porter on The WB’s Tarzan.

After making various guest appearances on Law & Order: Special Victims Unit, Dragnet (2003), and NUMB3RS, Callies gained a starring role on Fox’s Prison Break as Sara Tancredi. She played the role in the first two seasons, but her character was killed off for the third season before being brought back for the final, fourth season. According to Prison Break‘s executive producer Matt Olmstead, although the writers, the network, Callies herself, and he all wanted her to stay on the show, the character was written out related to contract disputes.

In March 2008, Olmstead stated that the character of Sara is still alive and would return in season four. Executive Producer Matt Olmstead admitted the fans’ overwhelming response to her death had influenced the decision to bring the character, and Callies, back to the show.

In 2010, Callies was cast in the major role of Lori Grimes on the AMC horror/drama series The Walking Dead, based on the comic-book series of the same name. The drama became the highest-rated show in that cable channel’s history. Callies played the role from the show’s start until season three. Grimes, her family, and friends are forced to fight relentless evil in the form of both flesh-eating zombies and the few surviving humans. Callies convinced the show’s writers to kill her character because that is what had occurred in the comic-book version.

Apart from that, Callies has also starred in two feature films – Universal Pictures’ Whisper and an independent film, The Celestine Prophecy. In April 2010, she appeared on the Fox Television drama House as a patient of the week, whose open marriage fascinates House and the team. The same year in August, Callies’ first screenplay, an adaptation of Campbell Geeslin’s children’s book Elena’s Serenade, was optioned by French production company Fulldawa Films.

Callies starred in the Nigerian movie Black Gold (2011) and one of the female lead roles in the Canadian thriller Faces in the Crowd (2011). In 2015, she co-starred with Nicolas Cage in Uli Edel’s thriller film Pay the Ghost. The next year in 2016, she returned to television in the lead role of Katie Bowman in Colony. Apart from that, she also has performed a soundtrack in Whisper.

There are no any much significant rumors and controversies regarding Sarah Wayne Callies in the mainstream media till date.

Furthermore, also find out more about the early life, career, net worth, relationships, and controversies of actresses like Erica Rose (Actress), India Oxenberg, and Renee Young.