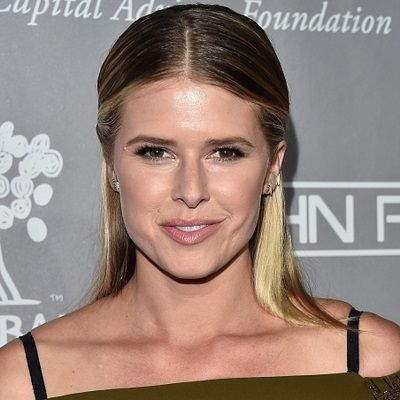 I love a lot of comedy movies. I think I fell in love with comedy when I was younger. My brother and I would always sit down and watch some of the classics. Bottle Rocket (1996) is one of my favorite comedies.

I lived in Greece. I had a lot of party experience there.

Sarah Wright is married to Eric Christian Olsen. They first met during the TV series, The Loop. She was mesmerized by Eric’s sense of humor and fell in love with him.

In 2011, she announced in the American talk, The Talk they are going to be engaged. Later, they married on the 23rd of June 2012 near Jackson Hole, Wyoming arranged by Erin’s parents.

They are blessed with two children, Wyatt and Esme. Wyatt was born on the 16th of August 2013. Three years later, they brought daughter, Esme in the world.

Previously, she was married to d A. J. Mason in 2005. However, they parted their way after a year.

Her Instagram posts suggest that her family is the best thing that happened in her life. Often she posts her quality time with her husband, Eric, and children.

Who is Sarah Wright?

Sarah Wright is an American actress and model. Wright is renown as Lucy Seal of the movie, American Made.

Next, she is appearing in Skinny Dip as Joe. She is the founder of Bāeo.

Sarah Wright was born Sarah Fay Wright on the 28th of September 1983 in Louisville, Kentucky. Her father, Robert  Wright is a preacher and mother, Debbie is a dental technician by profession. They are of British-Scottish-Irish ancestry.

She has a younger brother, Samuel. He serves in the United States marine.

She joined Hart Country High School in Georgia. Prior to that, she attended LeGrande Elementary for primary education. Later, she graduated from Seneca High School in Kentucky.

Sarah started her career at the age of 14 as a model. She was discovered by the 1999 Mossimo model search contest and got her big break as a model.

Before the model contest, she debuted in Hollywood with the Movie, 1998- Enchanted as David’s High School Date. Later, in 2007, she was cast in the comedy, Romance X’s & O’s as Jane. After a year, he appeared in the short movies The House Bunny, Wieners, and Made of Honor.

In 2017, she characterized the role of Lucy Seal in the movie, American Made along with Tom Cruise. Last, in 2019, she was cast in the movie, The Place of No Words with her husband, Eric Christian Olsen.

Sarah is also a popular name in the TV World. She debuted on TV with 2004- Quintuplets as Paige Chase. Till the date, she featured on more than a dozen TV series. Some of her TV series along with the Year and character name are-

Apart from that, she also makes through her skin line business.

She is a brown-eyed brunette. Her height is 5 feet and 9 inches and weighs around 59 kg.