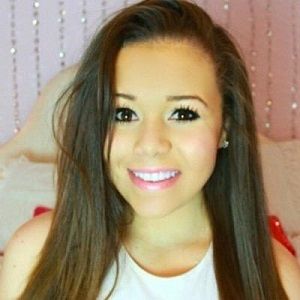 The beautiful and talented YouTube makeup artist and stylist, Sarai Jones is unmarried. She was in a relationship with Jaeger Scheppe, but the couple broke up in 2015.

She is currently possibly single.

Who is Sarai Jones?

Sarai Jones is an American YouTube Sensation who is immensely famous for her work as a makeup artist and is known by her name ‘Krazyrayray‘.

She made herself known to the entire world through her YouTube videos relevant to the makeup tutorial having over 2.7 million YouTube subscribers at the present time.

Sarai Jones was born to American parents in Seattle, Washington, United States of America, and was raised in the same place where she was born.

She was born on December 19, 1997, and currently lives in Los Angeles, California, United States of America. Her parents are Paul and Nicole Jones. Her brother’s name is Neiko.

Sarai’s nationality is American and her ethnicity is Caucasian. There is no information about the early life of Sarai Jones and her interest since her childhood.

Sarai Jones initiated her career as a YouTuber on July 9, 2009, with a video relevant to makeup. However, she could not continue her career until 2010. Later, during the year 2010, she made herself regular on YouTube and got her breakthrough with a video “Straight Hair with NO HEAT!” which crossed a total of 9.1 million views.

Her YouTube channel ‘Krazyrayray’ has more than 2.7 million subscribers at the present time. Apart from her career with her channel ‘Krazrayray’, she also worked with the web series network AwesomenessTV.

She is believed to be a good friend of another makeup artist Amanda Steele and has collaborated with another YouTuber and Instagram Star Dylan Jordan. Though her net worth is not revealed at the moment, it is believed that she has a decent amount of money as her salary.

No major rumors or controversies have hit Jones’ personal or professional life.

She has a TikTok account with over 18k fans.