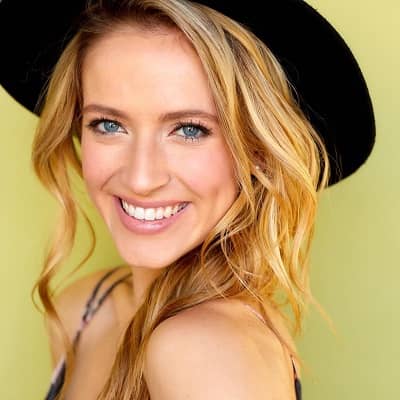 When I stand before God at the end of my life, I would hope that I would not have a single bit of talent left, and could say, "I used everything you gave me".

Sarati is currently having a happy conjugal life with her husband Jesse Callahan. Jesse serves as a brand manager for the Montford Agency, the agency endures in influencer marketing and management.

The couple started dating in the year 2016 and eventually, the duo tied the knot on the 13th of August, 2019. Further, she prefers to keep her personal life private though.

However, Sarati’s dating rumor with Eminem AKA Marshall Mathers was surrounded all over the internet in the year 2018. In February, the video of the two of them in the hotel room went viral but later it was confirmed that the video is a part of their music video, River’s scenes.

Sarati is an American actress and model. She is better known as a Tiktok star who is best for making short lip-sync and dance videos on Tiktok.

She noted as the ‘briefcase girl’ from the game show Deal or No Deal aired on CNBC. Currently, she has signed with Otto Models and Bicoastal Management.

Sarati was born in College Station, Texas on November 17, 1995. She is widely recognized as Sarati but her birth name is Sarah Ashley Toups. Sarah holds an American nationality and belongs of mixed descent (Catholic, Italian, German, and Irish).

The name of her parents Davis R. Toups (father) and Sharon Salvato Toups (mother). Her father is an attorney by profession and also a managing member of the Toups Law Firm in Houston. Similarly, her mother is a director and founder of Lil Wranglers. Sharon is a former Aggie Wrangler, class of ’89.

Also, she has an older brother named Seth Ashley. Talking about her academics background, she attended a Performing Arts High School.

At the age of 18, Sarati began her acting career and she started to took off fame after appearing on the game show called Deal or No Deal. She has been featured in the Eminem ft. Ed Sheeran music videos for ‘River’ as Suzanne in 2017. The music video was nominated for Best Cinematography at the 2018 MTV Video Music Awards.

Similarly, she starred in the popular FOX television show Lethal Weapon (2016-2019) and Freeform’s sci-fi series Stitchers (2015-2017). She has appeared as a guest on the comedy show Tacoma FD aired on TruTV.

Apart from this, Sarati has rapidly emerged popularity through her Tiktok account where she posts Lip-sync videos, dance videos, and fitness tutorials. As of now, she has accumulated over 9.9m followers and has a verified Tiktok account. Moreover, she runs her own company named ‘Montford Agency’, the agency which works for branding and promotion of media influencers.

To date, Sarati has managed to maintain a clean image in the public. She stays miles away from such sorts of rumors and disputes that could hamper her personal and professional life.

As of 2021, Sarati has an estimated net worth of around $1 million throughout her profession. In addition, she earned through some advertisements and promotes the brand. Furthermore, her salary and yearly income are still under review.

The actress has a slender body figure. She stands at the height of 5 feet 6 inches tall and her weight is around 57 kg. She has a pretty hazel blue pair of eyes and blonde hair color. Further, she has a fair complexion.