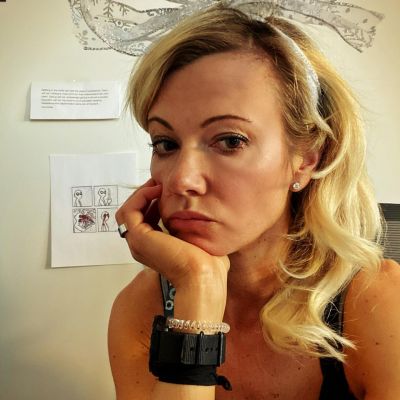 Talking about her relationship, Sarma Melngailis is possibly single and she is not dating anyone at the moment. It seems the star is focused on her career and professional life.

Previously, Melngailis was in a marital relationship with her business partner, Anthony Strangis. The ex-couple first met in New York and quickly became romantically involved. As per some reports, they were physically intimate.

Sarma and Anthony tied the knot on 5 December 2012 in a private manner. Sadly, they separated in 2018 after Sarma filed for divorce for cheating on her.

Melngailis is the owner and co-founder of Pure Food and Wine and One Lucky Duck which are both vegan raw food restaurants.

Moreover, her brand and restaurant were founded to promote the consumption of vegan raw food in New York City.

Sarma Melngailis was born on 10 September 1972. At present, she is 49 years young star. Likewise, her birthplace is Newton, Massachusetts, USA.

Sarma is the daughter of her father, John Melngailis whereas her mother is Susan Toye. Moreover, she has an elder sister as well.

Talking about her nationality, Melngailis holds an American identity whereas her ethnicity is Caucasian.

Regarding education, the chef studied at Newton North High School. Later, she completed her graduation from the University of Pennsylvania with a B.A. degree in 1994 and a B.S. degree in economics from the Wharton School.

Sarma worked at a high-yield investment fund at CIBC but left to study at New York’s French Culinary Institute. Later, she opened Commissary in 2001 alongside the chef, author, and speaker, Matthew Kenney but it closed in March 2003.

Next year, the businesswoman integrated Pure Food and Wine as New Yorks’s first upscale raw food restaurant along with Chodorow and Kenney.

In advance, the restaurant was listed twice in New York magazine’s “Top 100 Restaurants” and “The Plat 101” and fice years in a row in Forbes magazines list of “All-Star New Yor Eateries”. However, The Pure Food and Wine restaurant closed in spring 2016.

Sarma again opened One Lucky Juice and Takeaway in 2007 along with her two partners. It launched the website OneLuckyDuck.com in 2005 for snacks prepared and packaged by Pure Food and Wine.

Expanding its business, Melngailis opened its second branch in New York City’s Chelsea Market. From 2014 until July 2016, One Lucky Duck Juice and Takeaway operated in San Antonio, Texas which is also the first location outside of New York City.

A famed personality, Melngailis has earned a handsome amount of money from her profession. She lives a quality lifestyle along with her family.

As of 2022, It is reported that Sarma Melngailis has an estimated net worth of $1.5 million.

However, the businesswoman has not disclosed her exact salary, earnings, and assets details till now.

Sarma has been always part of different controversies. On 12 May 2016, the businesswoman and her ex-husband, Anthony Strangis was caught in Sevierville, Tennessee. It has been described that her husband, Strangis was wanted for grand larceny, a scheme to defraud, and violation of labor law.

Further, Melnagilis on 19 December 2016, prosecutors offered Melnagilis a plea deal in which she would consent to serve three years in prison. The chef petitioned guilty in May 2017 to stealing more than 2 million from investors as well as criminal tax fraud charges.

49 years young star, Sarma has beautiful looks and an admirable personality. She stands at a height of 5 feet 5inches. Also, she has a balanced body weight of 50kg.

Furthermore, Melngailis has brown eyes whereas her hair is blonde. Her body measurement is 34-26-34 inches(chest-waist-hip) respectively.

Sarma Melngailis is an active personality on social media regarding her social media presence. Sarma has more than 87.8k followers on her official Instagram account @sarmamelngailis.

She is also active on Twitter with around 19.7k followers.

Moreover, Melngailis is also available on Facebook with nearly 12k fans and supporters.