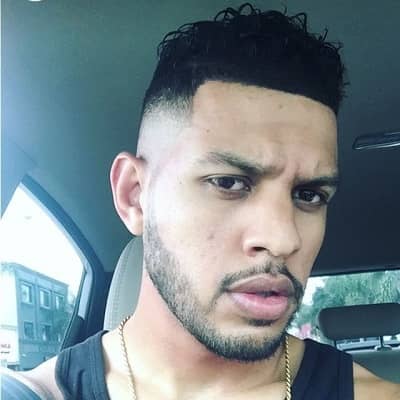 Jackson is romantically involved with Insecure C0-Star, Dominique Perry. Dominique is his HBO’s Insecure co-star. They are happy spending their time together.

Jackson is the father of their daughter Zennie. Zennie was born on May 22, 2018.

They have posted each other’s pictures on their respective social media accounts. The fans appreciate their relationship.

Previously, he dated Kaylen Zahara. They had a bitter breakup because of the cheating reports. Kaylen alleged him for betraying her.

Who is Sarunas Jackson?

Sarunas Jackson is an American Movie Actor, Writer, and Former Basketball Player. He gained enormous hype for his recurring role as Alejandro Dro Peña in the HBO series Insecure.

Sarunas Jackson was born on 12th March 1990 in Inland Empire, California, United States of America. His full name is Sarunas J. Jackson. As of 2021, he celebrated his 31st birthday. He was born in Philadelphia but spent most of his early childhood days in Los Angeles.

Likewise, he is the son of a Panamian, Jamaican, and Native American Mother. His father is of Afro-American and German Descent. He has a stepfather whose name is Romel P. Jackson. He has a younger brother named Darius D. Jackson and a step-brother, Marques A. Jackson.

Similarly, he is American by Nationality. Likewise, his ethnicity is mixed (Panamian, Jamaican, Native American, Afro-American, German) and follows Christianity. His Zodiac sign is Pisces.

Seeking his Academic Qualities, Sarunas attended Roosevelt high school for his schooling. For his further studies, he joined the saddleback college in 2009. Later, he enrolled at the University of California, Berkely.

The talented Basketball Player turned Actor, Sarunas started his career as a Professional Basketball Player. He played Basketball during his college days. He moved to various Asian countries like Tokyo, Taiwan, and Hongkong for whole 3 years to play Basketball. During those times, he Played for an AAU Team. Likewise, he applied for a 2013 NBA Draft.

He made his TV appearance from the commercials like Jordan Shoes. In 2012, he decided to pursue his career in acting rather than Basketball. In 2013, he made his first music video appearance for the Pharrell Williams song “Happy” as a dancer. He gained enormous hype for his recurring role as Alejandro Dro Peña in the 2016 HBO Comedy Series ‘Insecure’.

Moreover, he made his appearance in the movie, NBA 2K16 which was directed by Spike Lee. Jackson has played roles in various movies including Transparent, Major Crimes, Chi-Raq, The fifth Food Dream, Good Trouble, Covert, and Games People Play.

Sarunas is having a great career which helps him to earn impressive amounts to continue his living. He has an estimated net worth ranging from around $100K-$1M. Likewise, he charges a huge sum for his appearance in movies and series.

Likewise, he is living a lavish life in America.

Jackson is a respected and reputed American Movie Actor, Writer, and Former Basketball Player. There are no rumors about him. Similarly, he is not involved in any controversies up to now.

Sarunas is a good-looking man with an athletic body, great personality. His height is 6 feet 8 inches and weighs 95 Kg. Furthermore, his hair is Black and his eyes are dark brown.

Jackson is quite active on Social Media Platforms. He has around 212K followers on Instagram. Likewise, he is surrounded by 24K followers on his Twitter account.