Sasha Alexander is a Serbian-American actress. She has been married to director Edoardo Ponti and is the mother of three kids. 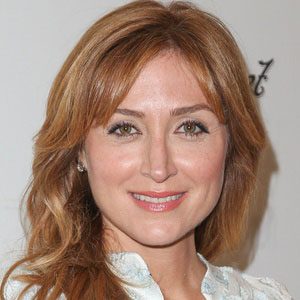 When I graduated college I needed to make money while I was pursuing acting, so I read screenplays and made a living writing coverage on them for studios.

When you read a script, you get a feeling from it.

My husband's a director, so he understands what I do.

Sasha Alexander is a married woman. She has been married to director Edoardo Ponti since August 11, 2007. The couple tied their knot at Orthodox Church of Switzerland. They have welcomed two children: Leonardo Fortunato Ponti on December 20, 2010, and Lucia Sofia Ponti on May 12, 2006.

Previously, she was married to Luka Pecel on September 18, 1999. But, the marriage was later annulled without issue. This actress has also dated a Venezuelan actor Alexander and a musician Spencer Smith in the past.

Who is Sasha Alexander?

She was born on May 17, 1973, in Los Angeles, California, USA. Her birth name is Suzana Drobnjaković and she is currently 45 years old. Her father’s surname is Drobnjakovic, and her mother’s name is Dobrila Pavlovich. She has a brother named Alexander. Sasha has not disclosed her father’s name. She started acting in school productions in the seventh grade.

She was an ice-skater but left due to a knee injury. Sasha moved to New York City to act in summer stock and Shakespeare festivals. She holds American citizenship and ethnicity is Serbian and can speak Serbian, English, and Italian.

Talking about her education’s history, she attended Southern California’s School of Cinema-Television and graduated from there.

Sasha Alexander has appeared as Karen Chambers in ‘Visceral Matter’ in 1997. After two years, she appeared as Miss America in ‘Twin Falls Idaho’. Her other notable film roles include as Melissa Meade in ‘Mission: Impossible III’ in 2006, Catherine in ‘He’s Just Not That Into You’ in 2009, Carolanne in ‘Play Dead’ in 2009, Adelaide in ‘The Girl from Nagasaki’ in 2013, Roz in ‘Bernard and Huey’ in 2017, etc.

She has an estimated net worth of around $6 million and she has earned that sum of money from her professional career. According to some sources, she earns from $300k to $500k for the main cast and earns from $150k to $200k per episode for her recurring role.

It seems she has not been involved in any types of rumors and controversies in her career and she likes to keep her profile low.