Sasha Banks was born is a professional wrestler. She is married.

Sasha Banks is a married woman as of now. She married her boyfriend, Sarath Ton. He is known by his stage name, Kid Mikaze. He is a professional wrestler and a costume designer for WWE.

This lovebird tied the knot on August 4, 2016. As of now, they are living happily without any sign of separation or divorce. 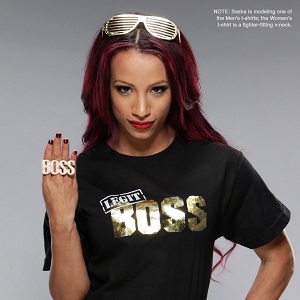 The Boss doesn't need friends, but the ones I do have, I keep very close

I've always known that I wanted to be different. I wanted to stand out, so my gear is very elaborate, very blingy, very loud, because I want people to notice me, want to look like me. The Boss necklace, the ring. I want everything big

Eddie Guerrero is my number one. He is the reason I am in the WWE - I wanted to be the female version of him.

Who is Sasha Banks?

Sasha Banks was born is a professional wrestler. As of now, she is a popular female wrestler in WWE. Previously, she wrestled in Chaotic Wrestling and NXT. Her nicknames are ‘Mercedes KV’, and ‘Miss Mercedes’.

Presently, she is signed to WWE under the brand RAW. Additionally, she is also famous for his moves like “Diving double knee drop”, “Frog Splash”, “Monkey Flip”, and others.

She was born in Fairland in the state of California. Born on January 26, 1992. She belongs to a mixture of African-American and German descent.

Her birth name is Mercedes Kaestner-Varnado. Sasha grew up with an interest in wrestling. Her mother’s name is Judith Varnado and her father’s name is not known.

She used to watch “All Japan Women’s Pro-Wrestling (AJW)” while growing up. She was raised in different places before finally moving to Massachusetts.

As per her education, she studied online. Other than that, there is no information regarding her academic achievement.

Sasha Banks has been a professional wrestler fighting for different companies. She made her wrestling debut at Chaotic Wrestling in 2010.

Afterward, in 2011, she won the title of “Chaotic Wrestling Women’s Championship. At the same time, she also wrestled for other independent circuits like “New England Championship Wrestling”, “National Wrestling Alliance”, and others.

Sasha Banks rose to fame after joining NXT; a developmental part of WWE. From 2012 to 2015, she wrestled in the NXT. The same year, she played for Women’s Revolution in RAW.

She joined the RAW brand of WWE. On July 25, 2016, she made her debut on RAW. Eventually, on her first appearance, she defeated Charlotte to win the WWE Women’s Championship for the first time.

Furthermore, she has won the same title for 2 more times until now. Additionally, she also won NXT Women’s Championship one time.

As the sources have estimated, this wrestler’s net worth is around $3 million. He also receives a salary of $250,000 annually.

Sasha Banks has been part of several controversies. Back in 2016, fans criticized her for calling her fan an airport creeper.

She re-twitted to a fan posting pic with her with a caption, ‘Airport creeper’. Additionally, she has been part of controversy regarding her insensitive promo for an upcoming match.