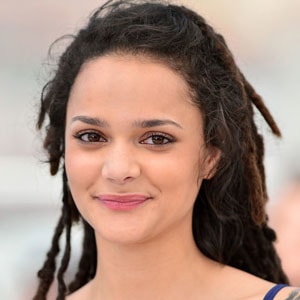 “I don't know what's next, and I like that idea. It's a little scary, but it's also beautiful. When you're open, anything can come your way.”

Previously, she dated ‘Transformers’ star Shia LaBeouf. After they shared the screen together in ‘American Honey’ in 2016, their relationship sparked.

They became closer and used to go on a long trip and vacation. The duo could not hold their relationship and separated in the same year.

Who is Sasha Lane?

Sasha Lane is an American actress and she debuted her film career from the film ‘American honey’ directed by Andrea Arnold for which she won the British Independent Film Award.

She was born on September 29, 1995, in Houston, Texas, U.S.A, as Sasha Bianca Lane. Her mother, Judith Marice Tuck is from New Zealand and of Maori descent.

Her father, Kenneth Wayne Lane is of African American descent. She was brought up in Frisco, Texas.

When she was young, her parents divorced and she lived with her mother, moving several times near Dallas before settling in Frisco, Texas.

She worked as a waitress at a restaurant and was a stand-out athlete on basketball, track, and field teams before she became an actress. Sasha has got a brother, Sergio Darcy Lane. She holds American citizenship but her ethnicity is mixed(African-American, European, Māori).

She joined Texas State University in San Marcos, Texas but left in between. Hence she is not a graduate.

Sasha Lane debuted from the critically acclaimed and award-winning film, ‘American Honey’ in 2016, which is about magazine crews, written and directed by Andrea Arnold. Lane was spotted on a beach while on spring break by Arnold. She said in the interview that she felt Arnold’s vibe and decided to trust for an audition.

She starred in a short film ‘Born in the Maelstrom’ in 2017. She stared in ‘Hearts Beat Loud’ directed by Brett Haley in 2018 and in ‘The Miseducation of Cameron Post’ directed by Desiree Festival which was praised for its sensitive, understated portrayal of adolescent self-doubt and discovery.

Sasha will be appearing in ‘Hellboy’ directed by Neil Marshall and ‘Daniel Isn’t Real’ directed by Adam Egypt Mortimer in 2019.

She has an estimated net worth of around $400,000 and her main source of income is from her professional career.

She has openly stated in an interview that she is a bisexual and attracted to both men and women.

To know more about Angie Janu, John Hurt, and Richard Karn, please click on the link.