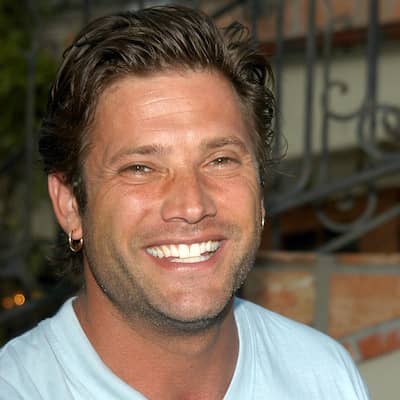 Sasha Mitchell’s relationship status at present is married but he is separated from his wife. He exchanged vows with Rachel Mitchell on 4 Dec 2010.

His wife is also known as Sharmaine Rayner and they now live apart. They separated in the year 2015 and are waiting for their divorce to be finalized.

Sasha at first was married to Jeanette Robbins on 3 March 1990 and got divorced in 1997. This ex-couple is blessed with four children. Their three daughters are Stacy Mitchell, Paulina Justine Mitchell, plus Caroline Mitchell.

Also, their son’s name is Ethan Mitchell. But their conjugal life got disturbed as Sasha was charged for beating his wife.

He was arrested in 1996 and was probated for three years. Further, he was also ordered to do community service. But Sasha did not follow the order so later he spent his 30 days in jail.

Who is Sasha Mitchell?

Sasha Mitchell is an American actor. He is popular for his acting skills in Dallas, Step by Step, Drunk Parents, and more.

His birthdate is 27 July 1967 and he was born in Los Angeles, California, the United States as Sasha Sergei Mitchell. But the name of his mother plus his father is unknown.

Sasha’s ancestry is a mix of Jewish-Ukrainian and regarding his academics, he kept the data secret.

Sasha Mitchell is a popular face of the entertainment world who has appeared in several TV plus movies. His debut movie was titled Death Before Dishonor that was released in the year 1987.

His briefly featured TV series are,

As of 2021, he has collected a net worth of around $600k US. The yearly salary from his acting journey is not calculated.

This Step By Step famed actor is keeping himself away from rumors and desperate scandals at present.

But he abused his first spouse for which he was in the media in 1996.

Sasha Mitchell’s height is 6 ft 3 inches and his body weight is average. In addition, his eyes are dark brown and his hair is in dark brown color.