Skip to content
Married Biography
Married Biography / Entertainment / Saudi Arabia Announced A Public Holiday to Mark Historic Win over Argentina in the 2022 World Cup! What the Players Received for Their Big Win?

Saudi Arabia Announced A Public Holiday to Mark Historic Win over Argentina in the 2022 World Cup! What the Players Received for Their Big Win? 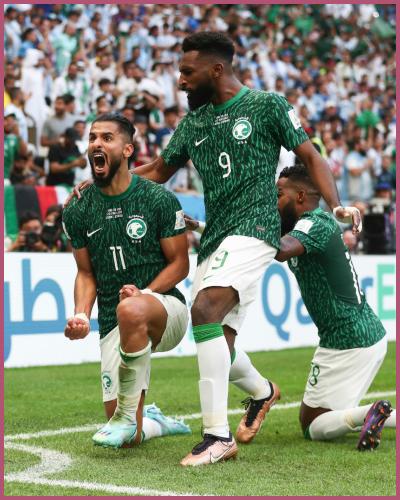 Saudi Arabia celebrates its victory against Argentina in a grand way

On Wednesday, the government of Saudi Arabia announced national holidays in the whole nation for the 2-1 World  Cup win over Lionel Messi’s Argentina.

Saudi’s unbelievable victory was a huge moment for the global sports stage, mostly because nobody was thinking that the nation could compete with Argentina, let alone win the match.

The government announced a public holiday for all state employees, private sectors, and male and female students in all educational stages.

“We are so happy about the result. It was an exceptional match from our falcons,”

“Our faith in our players was in the right place. We wrote history tonight.”

“Congratulations to everyone. This means a lot to every Saudi. This will give a huge boost to every Arabic team in the World Cup.”

Crown Prince Mohammad bin Salman‘s happiness seemed to have no bounds and he embraced his brothers after the full-time whistle.

The players allegedly received expensive cars from the Saudi government

University students received the afternoon off to watch the game. The city streets were almost empty. Women joined men everywhere, which is a rare sight in the desert kingdom, to take in the most unlikely win.

A Riyadh doctor who was equally excited about his nation’s victory said:

“What an amazing win for the Saudi national team.”

“There’s a lot that’s been changing in our country, many new achievements and an ambitious drive to become the best that we can be. Moments like this materialise these changes and remind you of how proud we are of our youth.”

Ahead of the match, Prince Mohammed told the players of the national team:

“All I want to tell you is stay relaxed, play your game and do your thing.”

While it was an ecstatic moment for Saudi, things were totally different in Argentina. There was shock and sadness among the Argentinian people.

The Saudi government was so happy with the win that they reportedly decided to give each player a Rolls Royce for their victory over Argentina, which is undoubtedly one of the top names in the history of the World Cup.

The expensive gifts received by the players created a frenzy on Twitter.

The Green Falcons, as they are called scored three points after defeating the South Americans and got first place in Group C.

Saudi made another history by becoming the first-ever Asian team to defeat Argentina by two goals and winning the World Cup’s opening match. It is also the first one to ever defeat La Albiceleste.