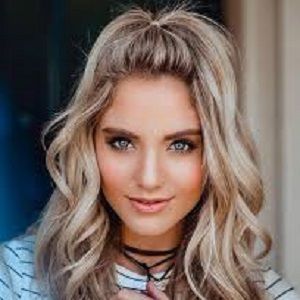 Especially as a teenage girl I think it's so important to have your dad in your life if you can, I think that definitely made me kind of go down a darker path.

What is the relationship of Savannah Labrant?

Savannah Labrant is currently married to Cole LaBrant on July 9, 2017. He is also a Viner and they met each other in 2016. This couple has welcomed a daughter named Posie Rayne in Dec 2018.

Talking about her past affairs, she was in a relationship with Tom Smith. However, this affair didn’t last long and they were separated. From this affair, Savannah gave birth to a daughter Everleigh on December 14, 2012, at the age of 19 only.

Who is Savannah Labrant?

Savannah Labrant is a social media star. She has her own YouTube channel and has a huge number of Instagram followers. In addition, she is also a fashion blogger, model, skilled photographer, actress, dancer, and musical.ly icon

She was born as Savannah Rose Soutas on March 02, 1993, in Santa Clara, California, United States.

She is an American national and her ethnicity is unknown. Regarding parents, her father’s identity is not disclosed but her mother’s name is Deborah Soutas. She has a younger sister Chantelle Paige Soutas (Pop Singer).

Regarding the educational background, there is no data about her academics. After her first child’s birth, she took a small break from her studies. Currently, she is pursuing a bachelor’s degree.

From the age of two, she has started dancing. Currently, she works as a fulltime photographer. Furthermore, she is also a fashion blogger and has a clothing store called SavLaBrant. Savannah Labrant also has a musical.ly account with over 9 million followers. She along with her husband has a joint YouTube account and creates content and fresh vlogs.

As a model, she endorses brands like SugarBearHair, Frio The Label, Bio Clarity, Lucy Love, Target, Collab, CurelUS, and more.

Although, she is very popular among social media. However, this talented woman hasn’t been awarded till now.

As the sources have estimated, this Savannah along with her husband has a combined net worth of around $5.5 million as of 2022. Her salary is unknown but it is sure that this social media personality earns a decent amount from her posts.

There are no rumors or scandals about this social media personality. Her posts are very entertaining rather than controversial.

Savannah Labrant has an amazing smile and high cheekbones. Her height is 5 ft 3 inches, weight is 50kg, shoe size is 5 US, and dress size is 4 US. She has blonde hair, blue eyes, and fair skin tone. Her body type is slim with a measurement of 32-24-32 inches.

Savannah Labrant is winning the public’s heart through her posts. She is active on social media. On her Twitter and Instagram, she has around 695k and 5.2m followers respectively. Similarly, her Facebook account has more than 562k followers.

This star has also a YouTube channel which has around 8.9 million subscribers.