Actress Scarlett Byrne is married and a mother of one. 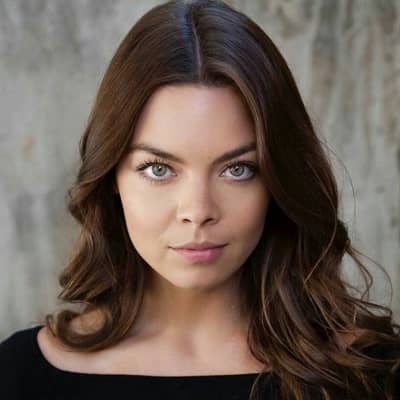 Currently, her husband is the chief of global partnerships for Playboy Enterprises. They got married in 2015.

On 24 August 2020, they welcomed their first daughter Betsy Rose Hefner in Los Angeles.

He traveled to England with his grandmother to ask Byrne’s father’s permission to marry her. Cooper got down on a knee with a massive yellow diamond ring.

She happily accepted and both the families celebrated this jolly occasion. The couple even announced on social media.

Cooper’s father Hugh also congratulated them through Twitter at the time he was alive.

Who is Scarlett Byrne?

Scarlett Byrne is a famous Actress well known for her role of Pansy Parkinson in the movie “Harry Potter” film series and Lexi in the TV series ‘Falling Skies’.

She has also played the character of Nora Hildegard in the series ‘The Vampire Diaries’. Byrne made her acting debut in the short film ‘CryBaby’ in 2005.

Scarlett Byrne, actual name Scarlett Hannah Byrne, was brought up on October 6, 1990. She was born and raised in Hammersmith, London, England. So, she holds British nationality. Currently, she is 30 years old and falls under the zodiac sign of Libra.

It seems her mother has passed away based on a certain tweet made by her, on mother’s day. In that tweet she wished her mother Happy Mother’s Day and that she loved and missed her. The name of her father is not given but he seems to be a very supportive parent.

As for her educational background, she has not revealed the name of the institution she attended. There are no details on which subject she studies either. But considering her age and job she must have completed her studies unless she decided to quit her studies and focus on her acting career.

Scarlett Byrne is a splendid actress who started her acting career at the age of 14. She first appeared in writer/director Asier Newman’s (Ash Newman) short film ‘CryBaby’. In 2008, she played the character Chloe Daniels in the 10th season episode, ‘Kiss My Asp’, of the BBC One soap opera ‘Doctors’.

In 2009, she secured the role of Pansy Parkinson in the movie ‘Harry Potter and the Half-Blood Prince’ which is written by J.K. Rowling. The ‘Harry Potter’ novel series is a fantasy-based story.

The first book of Harry Potter was released in 1997 named ‘Harry Potter and the Philosopher’s Stone’ followed by its sequel. Hollywood soon came up with a movie for the series.

Byrne had originally auditioned for the role of Luna Lovegood, which eventually went to Irish actress Evanna Lynch, she made her first appearance in the fifth movie ‘Harry Potter and the Order of the Phoenix’ (2007).

But, this did not make her give up then she successfully got the role of Pansy Parkinson and played the role for three films.

Pansy is a member of Slytherin House and a close friend of Draco Malfoy while they attended Hogwarts. J.K. Rowling has said she hates the character Pansy as she represents “every girl who had teased her at school”. Other three actresses have also played this character.

Scarlett has played in many other movies as well. In 2014, she portrayed the character ‘Sarah’ in a short film ‘Lashes’. After a year, she appeared in the TV movie ‘Sorority Murder’ as Jennifer Taylor.

Byrne has played the role of Alexis “Lexi” Glass-Mason in the TV series ‘Falling Skies’. Lexi is a human-alien hybrid and the daughter of Tom Mason and Anne Glass.

Scarlett was a part of the main cast in the fourth season and again showed up in two episodes of the fifth and final season.

During 2015 and 2016, she played the character ‘Nora Hildegard’ in the seventh season of The CW’s supernatural teen drama series ‘The Vampire Diaries’.

Before her, Natalie Romaine played the character in the sixth season. She has worked with Noah Wyle, Moon Bloodgood, and Drew Roy. She was cast as the lead in the action-thriller ‘Skybound’ in 2017.

In the year 2016, she appeared as a guest in MTV’s marijuana-themed comedy show ‘MAry+Jane’. After a year, she acted with Gavin Stenhouse and Rick Cosnett in the movie ‘Spellbound’ written and directed by Alex Tavakoli. She has starred in the short film ‘Stick and Poke’ and has featured nude in the ‘Playboy’ magazine in 2017.

One of the movies named “Collapsed Skies” in which she starred was nominated for the Saturn Award and the Young Artist Awards.

Scarlett Byrne is a renowned actress and has a net worth estimation of approximately $43 million. Her source of income is her acting and modeling career. Other information on her assets and salary is not given at the moment.

Despite her fame, Scarlett has maintained her personal and professional life successfully. She has never been involved in any sort of rumors and controversies. It seems Scarlett prefers to keep her personal life more private.

Byrne stands tall at the height of 64 inches and weighs 53kgs. The size of her breast-waist-hips is 32-22-33 inches respectively. She has a charming personality. She possesses a pair of dazzling hazel eyes and long dark brown hair.

Scarlett is available on social media. She goes by the name’@scarletthefner’ on Instagram and has 380k followers. Her accounts are verified. On Twitter, her username is ‘@scarleybyrne’, and has gained 83k followers.