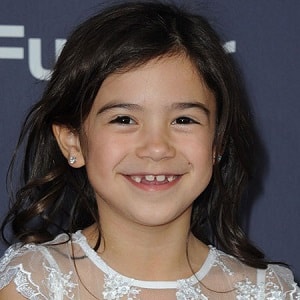 Who is Scarlett Estevez?

Scarlett Estevez is an American child actress. Currently, she plays the role of Trixie in the TV series ‘Lucifer’.

Furthermore, she also portrayed the role of Megan in the 2015 movie ‘Daddy’s Home’.

Scarlett was born in Los Angeles, California, in the United States on December 4, 2007. She is the daughter of Anthony Estevez who is a realtor.

Throughout her childhood years, she was raised in Los Angeles along with her siblings Eloise Estevez and Ben Estevez. She is of American nationality. Additionally, information regarding her ethnic background is unknown at present.

She showed interest in show business from an early age and she has already shown her capability as a versatile child actress.

Talking about her education, there is no information regarding the educational background of Scarlett at present.

Scarlett Estevez started her career in the show business at the age of just three after she cinched her first national commercial spot. Till now, she has already done more than 25 commercials, including most recently for Toyota, Disney, Home Depot, Minute Maid, KFC, and Cheerios.

Scarlett’s first role in a movie was in a short film called ‘The Magic Bracelet’ for the Make-A-Film Foundation. She played the role of a young Ashley in the movie. Next, she went on to shoot for her first feature film ‘And There Was You’ starring Garcelle Beauvais.

Furthermore, she co-starred in the pilot Redeeming Dave and the Nickelodeon Web series ‘Junior Eye’. Her most important role came after she was cast in a supporting lead in the movie ‘Daddy’s Home’.

Currently, Scarlett stars on the FOX television drama ‘Lucifer’ as Trixie. At a young age, she has successfully played numerous characters in various movies and television series. It is no doubt to anyone that there is more to come from this cute and adorable actress and she is set to become more successful in the coming future.

There is no information regarding the salary but her net worth is estimated to be around $700 thousand.

She garnered the Young Entertainer Award nomination in 2016 for her role in ‘Daddy’s Home’ in the category of Best Supporting Young Actress- Feature Film.

There are no rumors concerning Scarlett at present. Furthermore, she has kept her career away from any notable controversies to date.

Scarlett Estevez currently has a height of 3 feet 11 inches and a weight of 35kg. Furthermore, her hair color and eye color is brown.

Although just 12 years old, Scarlett is quite active on social media. She has a huge number of followers on social networking sites such as Twitter, Facebook, and Instagram.