Scarlett Johansson is an actress, model who portrayed the character of Marvel's The Black Widow. Scarlett is married to Colin Jost in Oct 2020. 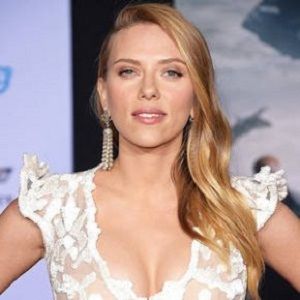 When we live our lives everyday, we're met by opportunities, and most of us don't even recognize them.

I'm just a big believer in 'you must love yourself before you can love anybody else,' and I think for me that breeds the most inspired relationships...

There is nothing strange, creepy, or inappropriate about John Travolta .

If you feel glamorous, you definitely look glamorous.

Scarlett is now married to a comedian. Her husband’s name is Colin Jost. They first were engaged in 2019 and then exchanged vows in a secret wedding in late Oct 2020. The couple wed in the presence of their close friends and family members following COVID-19 safety.

From 2001-02, while attending the Professional Children’s School, Scarlett Johansson dated classmate Jack Antonoff, who went on to become the guitarist for the band Fun. She dated her Black Dahlia co-star Josh Hartnett for about 2 years until the end of 2006.

Johansson began dating Ryan Reynolds in 2007, and in May 2008, were reported to be engaged. On September 27, 2008, the couple married in a quiet ceremony near Tofino, British Columbia. The couple announced their separation on December 14, 2010. Their divorce was finalized on July 1, 2011.

Following her separation from Reynolds, Johansson dated actor Sean Penn until June 2011, after which she entered a year-and-a-half-long relationship with advertising executive Nate Naylor. They split up in October 2012.

In November 2012, Johansson started dating Frenchman Romain Dauria and in September 2013, it was announced that they were engaged. Her representative confirmed on September 4, 2014, that their daughter, Rose Dorothy Dauriac, had been born on an unspecified date.

Who is Scarlett Johansson?

Scarlett Johansson is an American actress, model, and singer. Scarlett Johansson made her film debut in North (1994). Johansson garnered further acclaim and prominence with roles in The Horse Whisperer (1998) and Ghost World (2001).

She shifted to adult roles with her performances in Girl with a Pearl Earring (2003) and Lost in Translation (2003), for which she won a BAFTA Award for Best Actress in a Leading Role.

Johansson is considered one of Hollywood’s modern sex symbol and has frequently appeared in published lists of the sexiest women in the world.

Scarlett Ingrid Johansson was born on 22 November 1984, in NYC, New York, US. Her nationality is American and ethnicity is Ashkenazi Jewish (from Poland, Belarus, and Russia) Swedish, Danish.

She was born to Karsten Johansson (father) and Melanie Sloan (mother). She has an older sister, Vanessa, an older brother, Adrian, a twin brother, Hunter, and an older half-brother, Christian, from her father’s first marriage.

Johansson holds both US and Danish passports and citizenship.

She and her twin brother attended PS 41 elementary school in the Greenwich Village neighborhood of Manhattan. Johansson began her theatrical training by attending and graduating from Professional Children’s School in Manhattan in 2002.

She applied to New York University’s Tisch School of the Arts for the fall 2003 semester but was not accepted.

Johansson celebrates a “little of both” Christmas and Hanukkah and has described herself as Jewish.

Johansson began acting during childhood after her mother started taking her to auditions. She made her film debut at 9, in North (1994). Following minor roles in Just Cause (1995), and If Lucy Fell (1996), she played the role of Amanda in Manny & Lo (1996). Her performance garnered a nomination for Independent Spirit Award for Best Lead Female, and positive reviews.

After appearing in minor roles in Fall and Home Alone 3 (both 1997), she appeared in The Horse Whisperer (1998). She received a nomination for the Chicago Film Critics Association Award for Most Promising Actress for the film. In 1999, she appeared in My Brother the Pig and The Man Who Wasn’t There, a music video of “Candy”. Ghost World (2001) received her praise for performance in what is considered her break-out role. In 2002, she appeared in Eight Legged Freaks.

She was invited to join the Academy of Motion Picture Arts and Sciences in June 2004. The same year, she did 5 films: The SpongeBob SquarePants Movie; A Good Woman, The Perfect Score, In Good Company, and A Love Song for Bobby Long (which earned her a third Golden Globe for Best Actress nomination).

In 2005, Johansson starred in The Island (in a dual role), and Match Point (which received her fourth Golden Globe nomination for Best Supporting Actress).

She starred in Scoop, The Black Dahlia, The Prestige, and the short film ‘When the Deal Goes Down in 2006 and The Nanny Diaries in 2007.

In 2008, Johansson starred in The Other Boleyn Girl, Vicky Cristina Barcelona, and The Spirit. She acted in He’s Just Not That Into You in 2009. In March 2009, she signed on to play Natasha Romanoff, aka “The Black Widow” in Iron Man 2.

Johansson played in We Bought a Zoo in 2011. In November 2011, it was reported that she planned to make her directorial debut by adapting Truman Capote’s novel, Summer Crossing. She reprised the role of Natasha Romanoff in The Avengers (2012). In early March 2012, it was announced that Johansson had been cast in Hitchcock. She received a star on the Hollywood Walk of Fame on May 2, 2012. Also in 2012, she was cast in Don Jon.

She voiced the character, Samantha, in Her and cast in Under the Skin in 2013. In 2014, it was announced that she will star in & executive producer The Custom of the Country and reprised her role as Black Widow in Captain America: The Winter Soldier, Chef, and Lucy.

She again played Black Widow in Avengers: Age of Ultron in 2015. A mixture of close-ups, concealing costumes, stunt doubles, and visual effects were used to help hide her pregnancy during filming. On January 5, 2015, Variety announced that Johansson signed on to play the lead in Ghost in the Shell. Her casting was met with criticism from many fans and critics, calling the choice “whitewashing”. A petition was created in the effort to have her removed from the project.

Johansson again reprised her role as Black Widow in Captain America: Civil War in 2016, and will continue in Avengers: Infinity War and the Untitled sequel. She is the first woman to play Kaa the python, in The Jungle Book (2016).

On March 11, 2017, Johansson hosted Saturday Night Live for the fifth time. In January 2010, she made her debut on Broadway in A View from the Bridge, winning the 2010 Tony Award for Best Performance by a Featured Actress in a Play. She starred in a Broadway revival of Cat on a Hot Tin Roof beginning January 17, 2013. As a singer, she has released 2 albums, Anywhere I Lay My Head (2008) and Break Up (2009).

She is considered one of Hollywood’s modern sex symbol and has frequently appeared in published lists of the sexiest women in the world.

While her salary depends on the project endorsements, she has a net worth of $80 million. But her salary and other incomes are not disclosed.

Likewise, her cell phone was hacked and nude photos leaked on the internet in September 2011. Christopher Chaney was arrested, pleaded guilty, and was sentenced to 10 years in prison.

Moving towards her body measurements, Scarlett Johansson has a good height of 5 feet 3 inches (1.6 m) with a bodyweight of 57 kg.