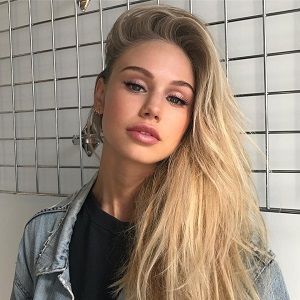 Scarlett Leithold is a gorgeous model and she is living her single life. She has not disclosed about dating anyone. Similarly, in the past, she hooked up with Justin Bieber.

As of now she is single and has not married to anyone. She is focusing on her career rather than love life.

Who is Scarlett Leithold?

Scarlett Leithold is an American model famous for her career in modeling. She rose to prominence when she began modeling for Brandy Melville. Currently, she is known for working at Next Models Worldwide.

She was born on 1 June 1997 in Los Angeles, California, the United States of America. She is the daughter of Sharolyn Leithold and she has two siblings. Her elder sister is Martine Leithold and younger brother Wolfgang Leithold.

Similarly, she moved to Butler, Pennsylvania with her family when she was a child. Later, she relocated to Los Angeles at the age of 11. Her nationality is American and she belongs to the mixed ethnicity of Swiss, German, Iris, Dutch, and English.

Talking about her education, she started homeschooling to keep her education on track after her modeling career took off.

Moreover, she has also partnered with ‘brandymelvilleusa’ in their Instagram posts where she can be seen wearing their clothing.

Scarlett Leithold might earn a huge amount of money from her career but she has not revealed her net worth and salary. According to some sources, the average salary of a model is $32,000-$48,000 per year.

Similarly, some source revealed that the average salary of a model in California is $42,000.

There was a rumor of Justin Bieber and Scarlett dating. Justin posted a picture with her on his Instagram account. But Justin cleared the rumor and said if he posts any picture with a girl, the reason is for a hookup. The photo of their together caught media attention.

Talking about the body measurements of Scarlett, she has a height of 5 feet 9 inches and weighs around 54 kg. Similarly, her waist, bra, and hip sizes are 24, ‎32.5, and 34 respectively. Her shoe size is 8.5 whereas her dress size is 2. Likewise, her hair color is blonde and she has blue color eyes.