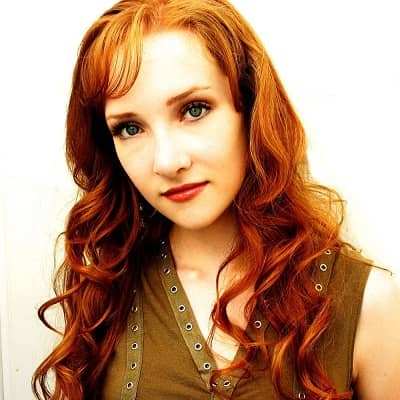 Scarlett Pomers is single at present and she is not dating anyone till now. Previously, it was rumored that she was dating Jonathan Taylor Thomas.

However, their relationship details are still not available anywhere.

The actress has maintained her profile low-key.

Scarlett Pomers is a well-recognized American actress, songwriter, and singer. Pomers has been most successful after portraying the role of Naomi Wildman on Star Trek: Voyager(1998-2001).

Scarlett Pomers was born on 28 November 1988. At present, her age is 32 years old. Likewise, her birthplace is Riverside, California, the USA.

Scarlett is the daughter of her mother, Michelle Galvin whereas her father’s details are still not revealed. Moreover, she has a half-brother as well named Shane Pomers.

Talking about her nationality, Scarlett holds an American identity whereas her ethnicity is Caucasian.

Regarding education, Pomers might have graduated from a reputed university. From her childhood, she was fascinated by music. The multi-talented personality started singing and learning guitar from her young age.

She came to the attention of an agent after performing at a local shopping mall. The agent furthermore, suggested her mother to involved Scarlett in acting.

Professionally, Scarlett started working from an early age of three in the year 1992. She emerged in the music video, ‘Heal the World’ by Michael Jackson. Meanwhile, Pomers was engaged in commercials as well. She has appeared on more than three-dozen advertisements.

In the same year, the star emerged in the role of Tina Denmark in ‘Ruthless! The Musical’, an all-female Off-Broadway musical. She also appeared as Sandy in ‘Adventures in Odyssey’ an Evangelical Christian radio drama and comedy series for children, that was sponsored by Focus on the Family.

Pomers has also starred in an American supernatural drama television series- ‘Touched by an Angel’. It was featured on CBS on 11 September 1994. The series featured 211 episodes.

Renowned actress, Scarlett Pomers’s most successful appearance was in 1998 in the role of Naomi Wildman n the UPN sci-fi program, ‘Star Tek: Voyager ‘. In the movie, Naomi was a half-Ktarian, half-human female, and was the daughter of Greskrendregtk and Samantha Wildman.

Additionally, she also appeared in many television shows which include Judging Amy from 19 September 1999 till 3 May 2005 on CBS. Going on, she becomes part of the WB series, ‘Reba’, and portrayed the character of Kyra Hart. Sadly, she could not be part of the fifth season of ‘Reba’ due to her illness.

Famous personality, Scarlett has also covered an AC/DC classic, ‘It’s a Long Way to the Top’ in a tribute album to the band named ‘Rock & Roll Train: A Millennium Tribute to AC/DC ‘.

Scarlett quit her profession in the year 2010 and is currently working as a photographer and a jewelry designer. Also, she performs voice acting.

32 years old, Scarlett Pomers has created her mark on the entertainment industry. She has been active in her profession from 1992 till 2010.

It is reported that Scarlett Pomers has an estimated net worth of $2 million.

Renowned celebrity, Pomers was admitted to an anorexia nervosa treatment facility in the year 2005. It is reported that she has lost her weight down to 73 pounds (33 kg) and she was working for nearly six hours each day.

Due to this, Scarlett has emerged in just two episodes of the fifth season of Reba.

After coming out of the provision, Pomers became the Ambassador of the National Eating Disorder Association and also featured an organization named Arch-Angels. The company collects money for the treatment of anorexic people who cannot do their treatment.

The multi-talented personality, Scarlett Pomers has charming looks as well as an admirable personality. she stands at a height of 5 feet 3 inches. Also, she has a balanced bodyweight of 55 kg.

Furthermore, Scarlett has dark grey eyes whereas her hair is dark brown.

Her body measurement is 35-24-25 inches (chest-waist-hip) respectively. Scarlett wears a bra size of 35B.

About her social media presence, Scarlett Pomers is silently active on social media. Scarlett has nearly 500 followers on her official Instagram account @scarlettnoelpomers.